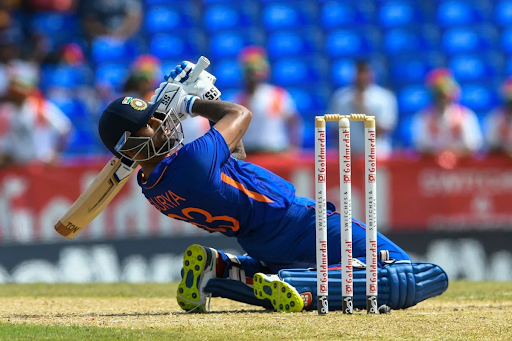 Suryakumar Yadav produced a brilliant knock of 76 to anchor India’s case against the West Indies in the third T20 international played at the Warner Park in Basseterre, St Kitts, on Tuesday night with the visiting side taking a vital 2-0 lead in the ongoing five-match series in the shortest format.

After the West Indies posted a competitive total of 164/5 in their 20 overs bolstered by a superb 73 by their opening batsman Kyle Mayers, Suryakumar Yadav, who has been promoted up in the opening slot in the last few matches by the Indian team, led a similar knock to power India to their second victory in the series with a superb knock.

Suryakumar Yadav scored 76 from just 44 balls with the help of eight boundaries and four sixes while he was well supported by the likes of Rishabh Pant (33 not out), Shreyas Iyer (24) and Deepak Hooda (10*).

Earlier in the match, Kyle Mayers dropped the anchor for the West Indies as the others batted around him to help their side to a competitive 164/5 in 20 overs. Brandon King scored 20, Nicolas Pooran managed 22, Rahman Powell scored 23 while Shimron Hetmyer made 20.

While Bhuvneshwar Kumar took 2/35 from his 4 overs for India, all-rounder Hardik Pandya was super impressive with the ball, returning with 4-0-19-1. Arshdeep Singh took one wicket for 33 runs in his four overs.

The action between India and West Indies will now shift to Florida in Miami where the teams will face off in the final two matches of the series at Lauderhill. The fourth match will be played on Saturday while the fifth and final match of this bilateral meeting between two cricketing powerhouses will take place on Sunday.