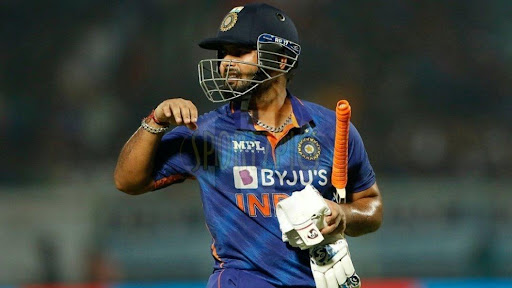 Former Indian player Sunil Gavaskar has questioned Rishabh Pant’s shot selection, saying it is “not a good sign” that the Indian stumper is repeatedly falling into the outside the off-stump trap in the ongoing series against Proteas.

Former Indian cricket player Sunil Gavaskar has questioned Rishabh Pant’s shot selection, saying it is “not a good sign” that the Indian stumper is repeatedly falling into the outside the off-stump trap in the ongoing five-match T20 series against South Africa.

Rishabh Pant, who has scored 740 runs in 47 T20Is at 23.12, has been getting out in an almost identical fashion while going for a big-shot wife outside the off-stump.

“They throw wide, and he keeps going for it. He can’t throw enough muscle on that. He has got to stop looking to go aerial that far outside the off-stump.

“There is no way he’s going to get enough on it. It has gone to short-third! They all plan it, South African bowlers and Temba Bavuma… just bowl wide outside the off-stump and you will get him.”

“10 times, he has been dismissed wide outside off-stump (in T20s in 2022). Some of them would have been called wide if he hadn’t made contact with it. Because he’s so far away, he has to reach out for it. He will never get enough power on it. To keep getting out in the same series in the same manner, for a captain of the Indian team, that’s not a good sign,”

While he couldn’t do well with the bat, Pant marshalled his resources well to coordinate India’s revival in the five-match series with back-to-back wins to leave the series tied at 2-2.

India defeated South Africa by 82 runs in the fourth match and Pant too admitted that there are “certain areas” in his batting that he needs to improve.

“As an individual, I can look to improve in certain areas. Not too concerned though. Looking to take the positives and looking to improve. Let’s see what happens in Bangalore. Looking forward to giving our 100 per cent,”

said Pant in the post-match presentation on Friday night.

India and South Africa will play their fifth and final T20 game on Sunday.