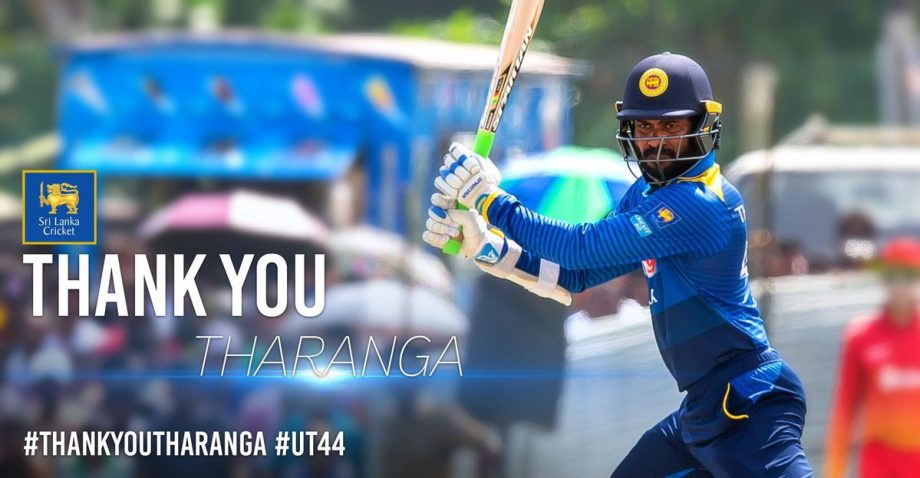 Sri Lankan veteran batsman, Upul Tharanga announced his retirement from international cricket on Tuesday, 23rd February. He last played for Sri Lanka in an ODI match during their tour of South Africa in Cape Town.

The 35-year-old left-hand batsman went on Twitter to thank Sri Lankan Cricket, his good memories while playing for Sri Lanka and the love and support from fans that he received all over the world. He also wishes good fortune to Sri Lankan cricket in the future and says that hope his team bounce back strongly.

“My Dear Friends, As the good old saying goes “All good things must come to an end”, I believe it is time for me to bid farewell to my International Cricket Career after over 15 years of giving the game my all. I leave behind a road travelled with fond memories and great friendships.

I am thankful to Sri Lanka Cricket for always having faith and the trust vested in me. I am grateful to the many Cricket Loving Fans, friends And my family for standing by me during my highest of highs and even at my lowest points in my career.

Your well-wishes and messages of encouragement were easily the drives behind my ambition. For that, I thank you all, and I wish you well. I would like to wish Sri Lanka Cricket all the very best for the future and I am hopeful that the team will bounce back strong soon. Thank you all!”

Tharanga has played 31 Tests matches for Sri Lanka in which he scored 1754 runs at an average of 21.89 followed by three centuries and eight fifties. The 35-year-old made his Test debut in Ahmedabad against India in December 2005 and played his last, too, against the same opponent at the venue of Pallekele in 2017.

The left-handed batsman was also an occasional wicketkeeper. He was the most successful batsman in the ODI format for his country as he made 6951 runs for his country at an average rate of 33.74 in the 235 games that he encountered. He made his debut in the format against West Indies in August 2005.

His career included 15 centuries and 37 half-centuries, with a career-best score of 174*, which is the second-highest by any Sri Lankan batsman in the format till now. Tharanga has retired as the fifth-best tone maker for Sri Lankan following Sanath Jayasuriya, Kumar Sangakkara, Tillakaratne Dilshan and Mahela Jayawardene

Tharanga has served as limited-overs stand-in captain on and off, mainly due to injuries to regular skipper Angelo Mathews from November 2016. Tharanga was handed over the reigns full-time when the latter stepped aside as Sri Lanka’s all-formats skipper in July 2017.

However, he did not have a good career as a captain. His captaincy career was hardly damaged with the team’s unimpressive performances including three 5-0 whitewashes which caused a lot of embarrassment in the board, and a couple of over-rate suspensions. Considering all these huge failures, he was eventually sacked from the role in November 2017, ahead of the series against India.

“Upul Tharanga has done a tremendous service as a player to Sri Lanka Cricket during his long career and has been an integral part of the National Team during its many achievements,”