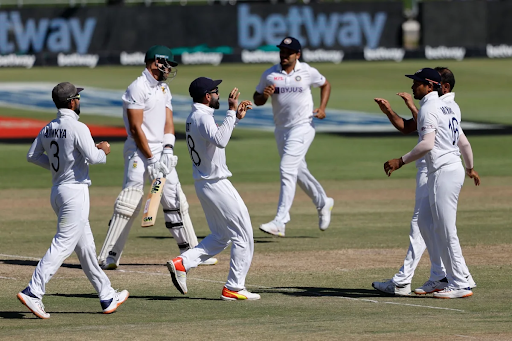 South Africa were placed in a strong position of 101/2 chasing 212 to win the third and final Test being played at the Newlands ground in Cape Town against India on the third day on Thursday. South Africa middle-order batsman Keegan Petersen was unbeaten on 48 the home team lost their captain Dean Elgar on what turned out to be the final delivery of the third day for a 96-ball 30.

The third Test is set for a thrilling finish given that the home team requires another 111 runs to win and have 8 wickets in hand but have also lost their hero from the second match, Elgar, who anchored their chase when they scored 240 to win and level the series.

The day, however, belonged to India wicket-keeper batsman Rishabh Pant who scored a brilliant century even though the others failed and flopped around him. Pant made exactly 100 not out from 139 balls with the help of six boundaries and four sixes in innings in which he was both disciplined as well as aggressive. But despite Pant’s spectacular century, India were bowled out for a poor total of 198 from 67.3 overs, with their middle-order batsmen flopping once again.

The day began with India losing their senior batsman Cheteshwar Pujara for his overnight score of 9, with Marco Jansen having him caught by leg slip. Soon, Kagiso Rabada had Ajinkya Rahane caught behind by wicket-keeper Kyle Verreynne for just 1, reducing India to 58/4.

India captain Virat Kohli joined forces with Pant to take the team ahead as the two batsmen added 94 runs for the fifth wicket to take India past the 150-run mark. Kohli once again batted with control and discipline but was not able to convert it into a big score. The India captain went for a drive on a wide delivery again, only to edge it behind and to be dismissed for 29 from 143 balls with four boundaries.

India were disappointed further when their lower-order batsmen Ravichandran Ashwin and Shardul Thakur failed to make a mark and were dismissed for 7 and 5 respectively. But thereon, Pant took matters in his own hands as he shepherded the remaining batsmen to get India as many runs as possible, and in the process, create history by becoming the only Indian wicket-keeper batsman to have scored a century in England, Australia and now South Africa.

India had taken a lead of 13 runs in the first innings which meant that South Africa were to chase 212 after bowling out the visiting team for 198. Jansen returned with figures of 19.3-6-34-4 whereas Rabada and Lungi Ngidi both took three wickets each.

South Africa began on a positive note as their openers Aiden Markram and Elgar survived a few initial overs. But their association did not last long as Markram was removed once again by Mohammed Shami, caught in the slips for 16 from 22 balls with the help of four boundaries. The home team required their middle-order to stand tall and deliver and the pair of Elgar and Petersen did exactly that, adding 78 runs for the second wicket before the former was dismissed by Jasprit Bumrah.