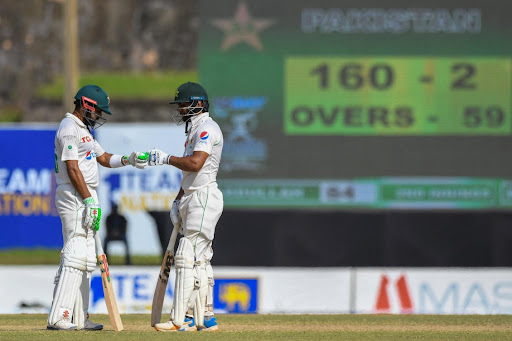 Abdullah Shafique remains 112 unbeaten at the end of day 4

At the start of day 4, Chandimal added eight to Sri Lana’s time-being score while Pakistani openers started the innings very well and took the side 87 for no loss then Shafique and Babar saved the side by their great partnership.

At the start of day 4, Chandimal added eight to Sri Lanka’s time-being score, however, passed up a century when Naseem Shah burst through Prabath Jayasuriya’s defenses.

Both Pakistan openers Imam ul Haq and Abdullah Shafique took the s team to 87 for no loss. That partnership was not without its initial jitters, however.

Shafique might have been out LBW to Prabath Jayasuriya in the third over, but the review showed the ball neglected to hit enough of the leg stump to upset the not-out decision.

Imam then, at that point, was given out against Kasun Rajitha but reviewed successfully the ball projected to have been disregarding the stumps. Not long from that point, Imam sent a difficult catch over the infield too, and a plunging Dinesh Chandimal couldn’t hold on, running back from the cover.

That this stand was broken was more to clever wicket keeping and player blunder, than supported pressure from bowlers. While batting on 35, Imam raised his back foot in the wake of leaving a Ramesh Mendis delivery and Niroshan Dickwella whipped off a bail.

The third umpire’s decision was a few minutes and demonstrating the boot to be plainly in the air. Azhar Ali then, at that point, batted 32 balls but was caught at slip off Jayasuriya’s bowling.

Babar imposed himself on the resistance right off the bat in his thump. He declared his appearance with a whip through mid-on for four, then, crashed a six and a four off over midwicket in one Jayasuriya over, to get Pakistan moving again after the loss of the second wicket.

He too, however, soon settled into a pattern of accumulation, favoring the leg-side for his bigger shots. He had a frantic LBW review burned on him shortly before tea. He and Shafique appeared to be resolved to doing it as hazard free as could be expected 31 of Babar’s 55 came from singles, and there were a singular two.

Sri Lanka’s bowlers appeared to be getting very little out of a surface that ought to be a spin bowling fantasy strip by now. However, out of nowhere, around 75 overs through the innings, the pitch showed some signs of life.

Shafique and Babar had just played and missed at the occasional delivery since tea, confidently cushioning bounty away, letting the ones outside off be, and getting sufficient bat to the rest that even half-chances were scanty.

In the last 10 overs of the day though, Pakistan’s batters were suddenly under huge pressure. Though they had batted to get themselves within striking distance and put themselves ahead in the chase, the 120 to get at stumps seemed a distance off even with seven wickets in hand.