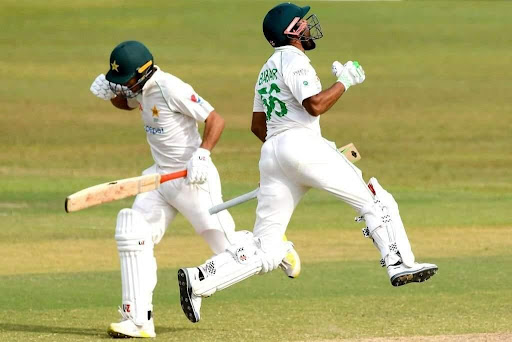 Babar Azam has kept Pakistan in the game

Pakistan had lost their wickets very early and their batters were struggling with the bat while Babar Azam made a century and rescue the team Pakistan with his remarkable innings in the company of Naseem Shah.

When play started after rain played spoilsport for a short period, the two overnight batters Azhar Ali and Babar Azam would have expected to take Pakistan to safer waters. Unfortunately for the tourists, Azhar was caught in front while attempting a sweep off Jayasuriya.

At that stage, Babar and Mohammad Rizwan properly hoped to take the aggressive route to share an opportune stand of 40. At the point when maybe the side would refute the danger of Jayasuriya, Rizwan tumbled to the off-twist of Ramesh Mendis, with the wicket-keeper snatching the opportunity.

Salman Agha, the debutant, followed Rizwan back to the cabin and excused LBW through a slider from Jayasuriya. Mohammad Nawaz couldn’t keep going long either with Oshada Fernando showing excellent reflexes at forwarding short leg to pouch the catch off Jayasuriya bowling.

The left-arm spinner then took his third five-for in just his second Test by dislodging Shaheen Afridi LBW.

He wasn’t quite so great against the tail, failing to get through after lunch, as Yasir Shah, and Hasan Ali put on valuable stands worth 27 and 36, respectively, with Babar.

In his 39 overs, during which he got figures of 5 for 82, Jayasuriya repeatedly beat right-handed batters’ outside edge, and threatened their pads with his straighter one. Ramesh Mendis who took 2 for 18 from his 13 overs, was more economical and acquired a more noteworthy turn. But no one threatened like Jayasuriya.

Sri Lanka set their field back for Babar, regularly putting at least seven fielders on the Boundary while he was on strike, then bringing the field in for Naseem.

Much obliged to some extent to Naseem’s resolute defense, and refusal to be tempted into big shots even when the spinners tossed it tantalizingly into the air, Babar kept pressing.

Occasionally, he would have enough of simply taking the single off the fourth or fifth ball, and wandered boundaries.

Pakistan went to tea with Babar requiring five more for his hundred, which he got three balls into resumption, whipping a full throw from Mahesh Theekshana through wide mid-on for four, before nurdling a single square on the leg-side to complete his seventh Test hundred, third against Sri Lanka.

Babar’s century was amazing for how many of his runs came in the company of the tail. While Sri Lanka, who at one phase appeared to be set to take a commanding lead, claimed one of only four runs and were 40 runs ahead by stumps.

They had lost skipper Dimuth Karunaratne to the left-arm spinner of Mohammad Nawaz.