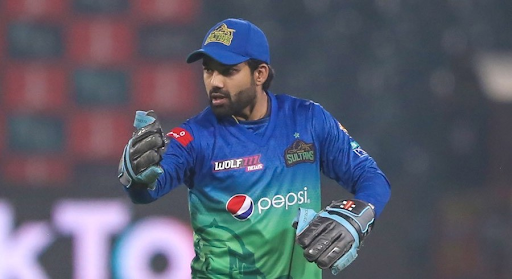 Multan Sultan won the match by 42 runs and they had lost their six consecutive matches in the ongoing league while the PSL is halfway through and Sultans have one foot away to qualify for the playoffs.

Peshawar Zalmi won the toss and was elected to field first. Sultans started the innings very well. Both their openers Rizwan and Masood played an outstanding inning. Both hit several fine boundaries and set a great partnership. After the end of the first power play, Multan went on 53-0. By their bats, runs were continuously flowing for Sultans.

Then, Wahab provides the first breakthrough for Zalmi by taking Rizwan’s wicket. Shan fell soon after and, for a while, the bowlers appeared to have a hold over the game.

Tim David, though, was playing through a delightful little knock finding fine boundaries to keep the run rate up even as batsman struggled at the other end.

In the last over, Saqib delivers a great over by taking two wickets and just giving seven runs.

The chase began devastating for the kings, with a mix-up between Kamran Akmal and Haider Ali seeing the latter out in the second over.

Anwar Ali, Muzarabanni, and Abbas took turns bowling during the power play, but each maintained control over the Zalmi batters, who could only manage to score 42-3 after the first power play.

Zalmi was never in the game as they regularly lose the wickets. Their batters look rusty against pacer and lost so much ground early that they couldn’t much of a mark against spinners either.

While Ben Cutting was still on the pitch and he try to put some runs on the board but couldn’t play long and lost his wickets to Khushdil Shah.

Peshawar Zalmi just manage to score 140 after the end of its innings and Sultans won the game by 42 runs.

“Credit goes to all the players and the management. We did make mistakes tonight in the field but we managed to nullify them through our excellent bowling performance. Conditions changed a bit during our batting innings and we thought 180-ish was a competitive total. We are trying to utilize Khushdil Shah in an all-round role and, thankfully, it’s working for now. We would like to test our bench strength in the coming games and see if we can nurture any upcoming players for the country.”

Shan Masood, the player of the match (MS):

“It’s always an honor to play for Pakistan. As a player, I have to stick to my process. I have just been a bit more clear and I’m taking it one ball at a time. It was a different pitch, looked like a belter initially but it got difficult in the latter half of our innings; I think we got a decent target on the board and credit to our bowlers for their performance tonight.”

“We are making mistakes in powerplay overs, both with the bat and the ball. I think it’s pretty difficult to make a comeback when you have that kind of a powerplay phase. As a team, we have not been able to execute our plans as well as we would have liked.”