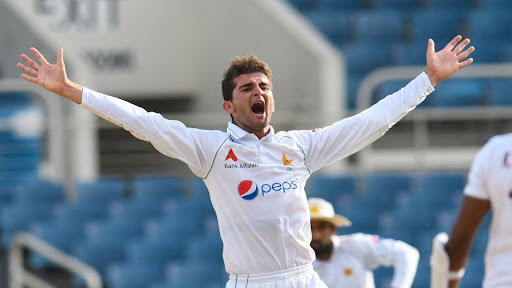 Pakistan beat West Indies by 109 runs in the final test match to share the spoils 1-1 at Sabina Park, Kingston.

At the start of Day5, Pakistan needing nine wickets While the West Indies were 280 runs away from the target. The 21-year-old pacer Shaheen Afridi completed his maiden 10 wicket haul in a match surprisingly as rain and bad light threatened him. However, West Indies opening batsman Powell was a runout casualty of his carelessness in finishing the third run. Bonner and blackwood made a great partnership of 60 runs for the fifth wicket when Pakistani bowlers emerged to be growing in disappointment.

The momentum had completely shifted in favor of Pakistan. The pacers picked up four wickets in the first session. Then, Nauman Ali came into the attack and caused problems for the batsmen. He claimed three wickets at the very crucial moment of the match. For West Indies, none of the single batsmen crossed the 50 runs while Jason Holder was top-scoring with a 47 run.

Captain Kraigg Brathwaite played a calm 147 ball knock for 39 runs but he couldn’t save his team. There was a bit of rain after lunch and the match stopped due to rain but even rain couldn’t save West Indies from losing the match. Pakistani bowlers bowled out West Indies for 219 on the final day of the test match. Pakistan won the final test match by 109 runs and level the series 1-1.

“It was a very important game for us especially after losing the first Test. The way we played, right from my partnership with Fawad to taking the wickets on the final day, made me proud. Afridi bowled well in the first innings, then we scored quickly to put them in before stumps on day four. The plan was to go till 330-340 and then have a go at them. We had to level the series and hence had to take bold decisions. Nauman also played a crucial role and his two wickets were very important. We knew there would be some assistance for the spinners on day five and hence we played Nauman. He (Afridi) is a great talent for Pakistan and he’s improving day by day, I am very lucky to have him lead the attack,”

“This game let us down. We were behind the 8-ball from the beginning. Test cricket is not easy. The First 30 balls for a batter are always tough. We need to figure it out. I still think the series was positive. The team did a superb job in the first Test. Kudos to the bowlers. They did a fantastic job. This Test, the first innings let us down. We did make some strides. Seales is a star in the making. The Sky is the limit for him. The length he produces is remarkable. He has a bright future ahead of him. They were very consistent as a bowling unit. Despite it being hot, they all hit the right straps. Fawad getting a 100 is something for us and our team to learn,”

“It is a great effort. The team needed this win and I am happy to deliver. It was tough; last day, the weather was hot and as a team, we know if get one wicket we will get the next one. We gave 100 percent as a team and that’s why we won the game. All credit goes to my brother Riaz Afridi, he is my brother and my father, also to my family. It was crucial for us to win this game and open our WTC account,”

Player of the Match and Series: