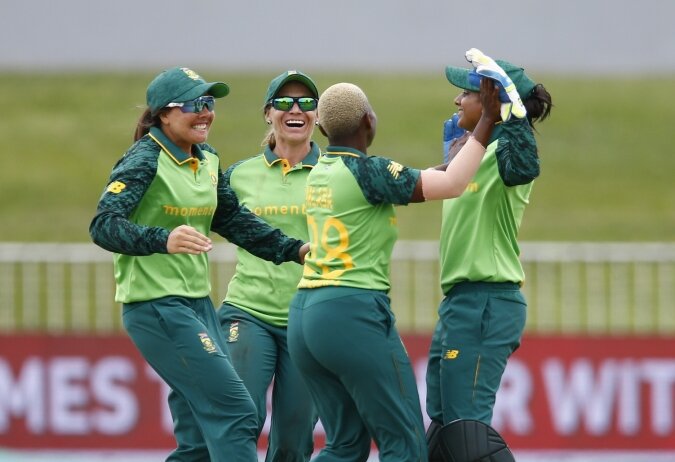 Nida Dar and Diana Baig’s all-round efforts went in vain as Pakistan lost the series opener against South Africa by 3 runs in response to South African total of 200 runs at Kingsmead, Durban on Wednesday.

Requiring 13 runs in the final over, Baig managed to bring down the score at 4 off 1 ball before Nadine de Klerk bowled a dot ball to take her side home by 1-0 in a three-match ODI series in South Africa.

Earlier today, Pakistan won the toss and sent in South Africa to bat first. South Africa could not bring up an idea as Baig picked up two wickets one after another, leaving South Africa on 24-2 in the fifth over.

Laura Wolvaardt and Goodall steadied the ship with a decent 60 runs stand before both of them lost their wickets in a quick session, the former got run-out by Baig.

The Pakistan spin trio; Dar, Sadia Iqbal and Nashra Sandhu bowled brilliantly in the middle overs before Kapp found her ways to score runs, Dar and Sandhu picked up two wickets each.

The all-rounder put a 64 runs stand alongside Mignon du Preez to keep the scorecard moving before Kapp fell short of 3 runs for a half-century as she got stumped in the 44th over off the bowling of Dar.

In response, Pakistan had a terrible start after losing three quick wickets of Nahida Khan, Muneeba Ali and Javeria Khan by the 11th over.

Omaima Sohail, who just returned to the side made an impactful 37 but the South African debutant Nonkululeko Mlaba’s bowled some real tight overs as she conceded only 19 runs in the 10 overs spell.

In 17.2 overs, since Dar arrived on the crease, the hosts have conceded only 36 runs, losing Sohail and Sidra Nawaz in the process.

However, Aliya Riaz provided some pace in the innings after putting a 51 runs standoff 62 balls alongside Dar to put some life back in Pakistan’s chase.

Shabnim Ismail’s double strike put the equation down to 72 off 70 balls for Pakistan with three wickets in hand. Sandhu went next on the list for 5 to weaken Pakistan’s chances further.

Dar who had impressed with her all-rounding performance was steadied at that stage, she kept scoring runs in the late overs. She was partnered with Baig to put up a 60 runs stand for the ninth wicket,