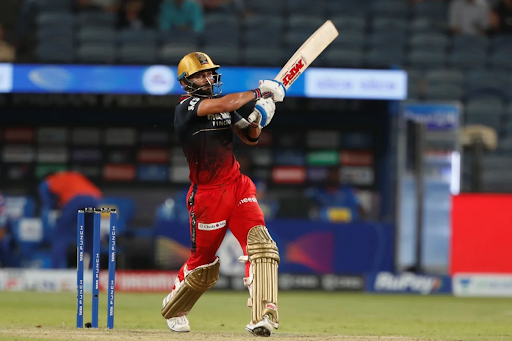 After restricting Mumbai Indians to a moderate total of 151/6 in their 20 overs with Suryakumar Yadav scoring a fine unbeaten 68, Royal Challengers Bangalore produced a strong batting performance to reach 152/3 from 18.3 overs with Anuj Rawat leading the way.

Apart from Anuj Rawat and Virat Kohli, the heroes of Royal Challengers Bangalore when were Sri Lankan spinner Wanindu Hasaranga and right-arm Indian fast bowler Harshal Patel, who returned with figures of 4-0-28-2 and 4-05 and 23-2 respectively to help their side earn two points.

Mumbai Indians were left struggling at 79/6 in 13.2 overs after Royal Challengers Bangalore won the toss and invited their opposition to bat first. Mumbai Indians captain Rohit Sharma made 26 whereas their dashing wicket-keeper batsman Ishan Kishan also made 26.

Despite an impressive start in which Mumbai Indians opener Rohit Sharma and Ishan Kishan adding 50 runs for the first wicket, they suffered a batting collapse to lose 6 wickets for the next 29 runs. The young Dewald Brevis fell for 8 whereas Tilak Varma was run out without even opening his account.

Kieron Pollard disappointed once again as the West Indies captain fell for a first-ball duck against RCB spinner Wanindu Hasaranga, who also bagged the wicket of Brevis.

Suryakumar Yadav fought hard for the Mumbai Indians, scoring an unbeaten 68 from 37 balls with 5 fours and 6 sixes and even though he managed a strong 72-run partnership with Jaydev Unadkat, their side could not get to a total which would have been challenging one for the RCB side.

For Royal challengers Bangalore, the opening pair of Anuj Rawat and Faf du Plessis added 50 runs from 49 balls which was followed by a strong 80-run partnership between Virat Kohli and the left-handed Anuj Rawat, which came from only 52 balls and broke the back of Mumbai’s defence.

The defeat on Saturday night was the fourth consecutive loss for Mumbai Indians in the ongoing tournament, who slipped to the bottom of the IPL 2022 points table where they have been joined by Chennai Super Kings, who suffered a defeat at the hands of Sunrisers Hyderabad earlier in the day.