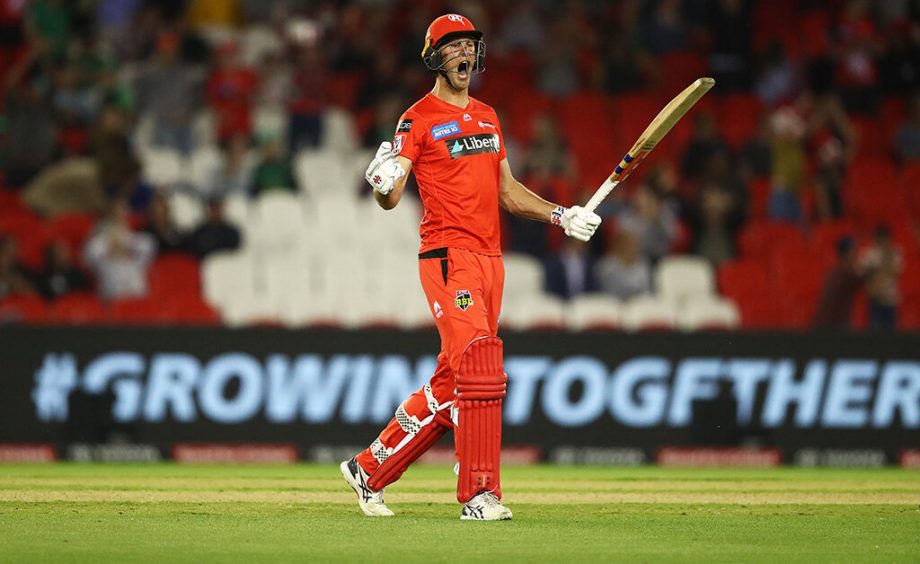 Mackenzie Harvey’s stars for Renegades to record their third win of Big Bash League against Melbourne Stars at Marvel Stadium in match 45.

The Renegades have taken revenge on their cross-city rivals by five wickets at Marvel Stadium on Wednesday to dent the hopes of Stars for the final, thanks to Harvey’s unbeaten 47 which did the trick.

After winning the toss and electing to bat first, Stars went for a start that they had not expected. Shaun Marsh went to the pavilion for 1 and the skipper, Aaron Finch continued to disappoint with his out of form as he left the crease on 10.

The Stars set a target of 158-6 at the end of the first innings following a steady knock from Nick Larkin who scored an unbeaten 61* off 47 balls after a lousy start in the first overs.

Andre Fletcher, whose Big Bash journey is finished due to an injury, lost his wicket on 11 after Josh Lalor clean bowled him.

However, Marcus Stoinis joined with Nick Larkin for an amazing 41 runs stand to keep the scorecard moving. Stoinis blasted 6 fours in his 32 runs as he found ways through the weak bowling Renegades.

Soon after that, Zak Evans picked him up and ended his show before he tried to hit a six that ended up in the hands of  Fraser-McGurk on the boundary.

Nathan Coulter-Nile came to bat next but he was bowled out immediately by Evans following a missed shot.

The skipper, Glenn Maxwell followed the same pathway left by Stoinis, gave an easy catch on the boundary to Jake Fraser-McGurk on 1.

But Stars eventually managed to steady the ship through Larkin and Nic Maddinson.

Maddinson hit a couple of sixes after Peter Hatzoglou got him out on 21 by Beau Webster.

Hilton Cartwright was next on the list after Hotzoglou bowled him out on 4, Larkin kept the scoreboard moving in the last few overs to take Stars towards the total of 158.

While chasing, Renegades were not in a good shape to reach the target after Shaun Marsh and Aaron Finch lost their wicket cheaply. Sam Harper and Fraser-McGurk picked up the innings from there and they put a solid 40 runs stand.

Both the batsmen were very composed and they knew what they were doing but then came a twist in the game after they both lost the wickets in quick sessions.

Mackenzie Harvey, however, had another plan as he smashed a thrilling knock of 47* off just 21 balls alongside Beau Webster 22* (9) to seal a rare victory by five wickets. Melbourne Stars have weakened their hopes for the final after losing this but miracles happen, who knows!