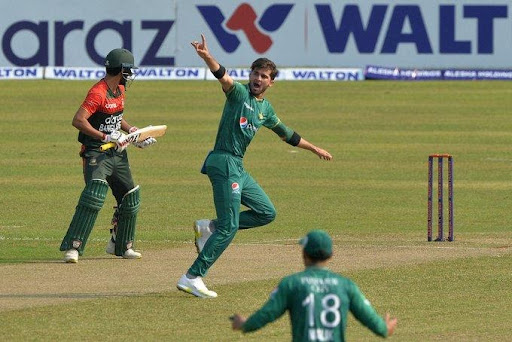 Fakhar Zaman and Mohammad Rizwan raced towards the chase after Pakistan restricted Bangladesh on 108/7 in 20 overs in the second T20I of the three-match series at Dhaka Sher-e-Bangla Cricket Stadium on Saturday.

Fakhar Zaman and Mohammad Rizwan put on the top gear to reach the target after Pakistan restricted Bangladesh on 108/7 in 20 overs in the second T20I of the three-match series at Dhaka Sher-e-Bangla Cricket Stadium on Saturday.

Both teams will play the final match of the series at the same venue on November 22.

Earlier the day, Bangladesh skipper Mahmudullah opted for the same strategy of batting first after winning the toss in the second T20I.

Bangladesh openers had a terrible start once again after Shaheen Afridi who replaced Hassan Ali for the match picked up the wicket of Saif Hasan on a duck in the first over.

On the other end, Mohammad Wasim removed Mohammad Naim on 2.

Afif Hossain and Najmul Hossain Shanto were the only two batters who provided enough support to the scoreboard. They lifted their side for a 45 runs stands for a third wicket after two early dismissals.

Both the batters were undone by Pakistan vice-captain Shadab Khan. Afif made 21 balls 20 while Najmul scored 40 off 24 balls.

No other batter showed enough resistance and the home side were restricted on 108/7.

Shaheen Afridi and Shadab Khan were the top bowlers from Pakistan after ending on the figures of 2/15 and 2/22 respectively.

While chasing the target, Pakistan faced an early blow in Babar Azam (1) who threw his bat at the ball off Mustafizur Rahman and chopped his stumps.

Do not miss: IPL the cash cow for other formats, says Shastri

Meanwhile, the in-form Pakistan batters Fakhar Zaman and Mohammad Rizwan raced towards the target. Fakhar scored the seventh half-century of his career while Rizwan scored 39 off 45 balls.

Rizwan got bowled out by Mustafizur in the 16th over after which Haider Ali took the responsibility alongside Fakhar. The duo chased down the target on the first ball of the 19th over.

“We started well, Afif and Shanto batted well. Me and Shanto were trying to get a partnership but didn’t capitalise in the last few overs. I think a team like us need a set batter till the 15th over, we didn’t do that. Boys are putting in a lot of effort at training, taking catches, doing all the things right but are missing chances. I think last five-six months, our bowling unit has been outstanding, both pace and spin department. It’s the batting unit that have to deliver.”

“Wasn’t easy to play shots early on, wanted to build partnerships and succeeded. Thankfully we finished it off well. It was a better wicket than yesterday’s, not an ideal wicket but better than yesterday. Whenever you play outside your country, it’s important to win games. We’ll try to win the third game as well.”

“Team effort, happy with the way the boys carried forward the momentum. We bowled well in the middle overs, finished it off well.”