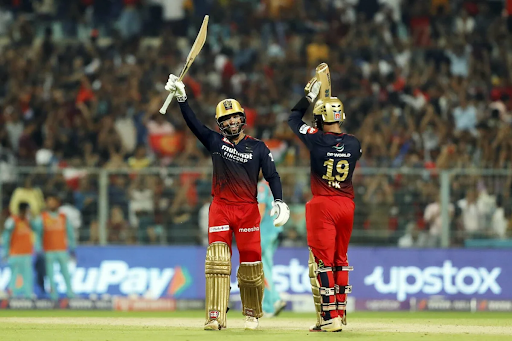 Rajat Patidar smacked his first-ever century in the Indian Premier League (IPL) to power Royal Challengers Bangalore (RCB) into the Qualifier 2 contest, which they will play against Rajasthan Royals in Ahmedabad on Friday.

Royal Challengers Bangalore defeated Lucknow Super Giants (LSG) by 14 runs in the Eliminator contest played at the Eden Gardens on Wednesday night to progress further, after what had been an intense and high-scoring game between the two teams.

The right-handed batsman Rajat Patidar proved to be the difference between the two teams, as LSG were totally outplayed by the RCB side who have been riding on their luck combined with some hard work done on the field and off it in order to survive for this long in the tournament.

Many big teams have failed to sustain the pressure and performances this season but not RCB, who have continued to fight on and have reached what will virtually be the semi-final against Rajasthan Royals. The winner of Qualifier 2 will face Gujarat Titans, who have been on a roll this year.

On Wednesday night, the right-handed No 3 Rajat Patidar powered Royal Challengers Bangalore to a big score of 207/4, scoring more than half of these runs himself. Rajat Patidar smacked 7 sixes and 12 fours to make 112 from only 54 balls, which was a match-winning performance for his side.

Earlier in the contest, RCB had lost their captain Faf du Plessis for a first ball duck with Mohsin Khan striking early on whereas Virat Kohli struggled for the timing and momentum in the middle as he scored 25 from 24 balls with the help of two boundaries.

While none of the other RCB batsmen could trouble the scorers, wicket-keeper batsman Dinesh Karthik once again chipped in with a valuable knock of 37 from 23 balls with the help of 5 boundaries and a six.

In the reply, Lucknow Super Giants were rocked early by Mohammed Siraj, who got rid of the dangerous Quinton De Kock who had scored 140* in his previous outing in the tournament.

KL Rahul tried to take the attack to the opposition but he did not have enough support from the other end with calling for an 11-ball 19 and Deepak Hooda trying his best during his knock of 45 from 26 balls with four sixes and one boundary.

Lucknow captain KL Rahul scored 79 from 58 balls with five sixes and three fours but his effort was not enough for his side to go past the finish line. Marcus Stoinis scored 9 whereas Evin Lewis (2) and Dushmantha Chameera (11) were at the crease when RCB completed a comprehensive win by 14 runs at the Eden Gardens.

In reply to RCB’s total of 207/4, Lucknow finished at 193/6 in their 20 overs. Australia fast bowler Josh Hazlewood was the pick among the bowlers for Bangalore as he returned with 4-0-43-3. Among the other wicket-takers for RCB were Mohammed Siraj, Wanindu Hasaranga and Harshal Patel, who all claimed one wicket apiece.