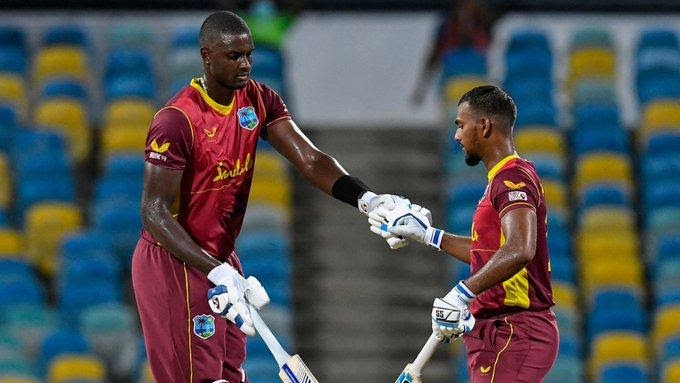 Nicholas Pooran and Jason Holder make sure that West Indies stay alive in the series after beating Australia by 4 wickets and 72 balls to spare at Barbados on Saturday.

Half-centuries from Nicholas Pooran and Jason Holder guide West Indies a series leveling-win in the second ODI by 4 wickets at Kensington Oval in Barbados on Saturday.

Chasing a modest total of 187, West Indies trembled on 72/5 before Pooran, who earned man of the match award for his unbeaten cameo of 59 and the former skipper, Jason Holder who put a valuable 52 to combine a 93 runs stand for the seventh wicket and shifted the gear towards their side.

Soon they reached 191/6 with 12 overs to spare. After this match, the result will be announced at the same venue in the third ODI as the series decider.

Batting first, Australians had to recover themselves from an even more desperate situation.

The decision to bat first was made on Thursday before the match got suspended following a Covid-19 positive case from a non-playing West Indian staff member, Australia was stumped on 45/6 as the spinner, Akeal Hosein picked up three quick wickets before West Indian seamers did their job.

Agar was originally left out from the playing XI but he was added as a replacement of Josh Hazlewood, who complained of calf strain after staying in his hotel room for 48 hours due to Covid-19 scare, scored an entertaining 41 while Wade and Zampa contributed 36 runs each.

Starc after producing useful 19 runs with the bat looked in fine touch with the ball as he warmed up. He threatened the West Indian top-order after dismissing Evin Lewis and Darren Bravo in quick succession.

But Pooran who dropped twice made use of the good fortune alongside Holder’s brilliance and forced Alex Carey’s lead team to surrender.

“This was all about putting in the hard work,”

said Pooran in reflecting on his contribution to the result.

“We know it is never easy against a team like Australia and while we didn’t help our own cause with some of our earlier batting, I really want to credit the support of Jason in helping to take us over the line.”

Alex Carey admitted that it was too much for the bowlers to handle.

“We did well to come back from the situation we were in earlier in the match and that’s something we are going to have to look at heading into the final match,”

“It should make for a really great occasion after that Covid scare that the series now comes down to a virtual final.”