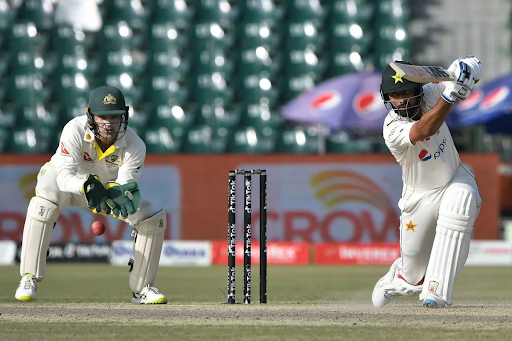 Pakistan were placed at a strong position of 90/1 in reply to Australia’s total of 391 in the first innings of the third and final Test being played at the Gaddafi Stadium in Lahore on Tuesday. The home team was trailing by another 301 runs with their opening batsman Abdullah Shafique reaching 45 not out in the company of former captain and home boy Azhar Ali, who was batting on 30 not out.

Shafique and Azhar have so far added 70 runs for the second wicket after Australia captain Pat Cummins removed the left-handed opening batsman Imam-ul-Haq for 11, post the visiting team’s innings folded for 391. Australia looked set for a big total somewhere in excess of 450, but Pakistani fast bowlers led by Naseem Shah did a commendable job of keeping Australia under the 400-run mark.

The play began on the second day of the final Test with both the teams yet to win a game in the series, and Australia looking to build more on their overnight total of 232/fi5ve. The partnership between Australia wicket-keeper batsman Alex Carey and all-rounder Cameron Green flourished in the first session on the second day, which eventually finished at 135 runs for the sixth wicket.

Carey looked set for a century but his innings was cut short by left-arm Pakistan spinner Nauman Ali, who had him trapped in front of the wickets for 67, which came from 105 balls and seven boundaries.

The Pakistani fast bowlers, particularly Naseem Shah, were able to generate reverse swing which resulted in the dismissal of Green, who was marching towards his maiden hundred of his career.

Shah produced an incredible delivery which came in sharply to beat the defence of Green and crash into the wickets, restricting him for 79 from 163 balls with the help of nine boundaries.

The rest of the Australian batting could not do much as they folded for 391 with Naseem Shah returning with impressive numbers of 31-13-58-4 whereas Shaheen Shah Afridi claiming 4/79 from his 24.3 overs in which he bowled only three maidens. Nauman Ali got one wicket whereas Sajid Khan too had to settle for a solitary dismissal to his name.

In reply, Pakistan made a confident start with the pair of Shafique and Imam-ul-Haq keeping the Australians at bay for more than first half an hour. However, Cummins pinned Imam-ul-Haq in front of the wickets on a superb delivery bowled in the line of the wickets to remove him for 11, which came from 41 balls and a couple of boundaries.

At stumps, Shafique was batting on 45 having faced 117 balls and hit six boundaries in the process whereas Azhar Ali had hit a six and a4 to make 30 not out from 79 balls.