PAK spinners did the magic on day 1 to bowl out SA on 220, SA gave a stunning reply after at the end of day 2 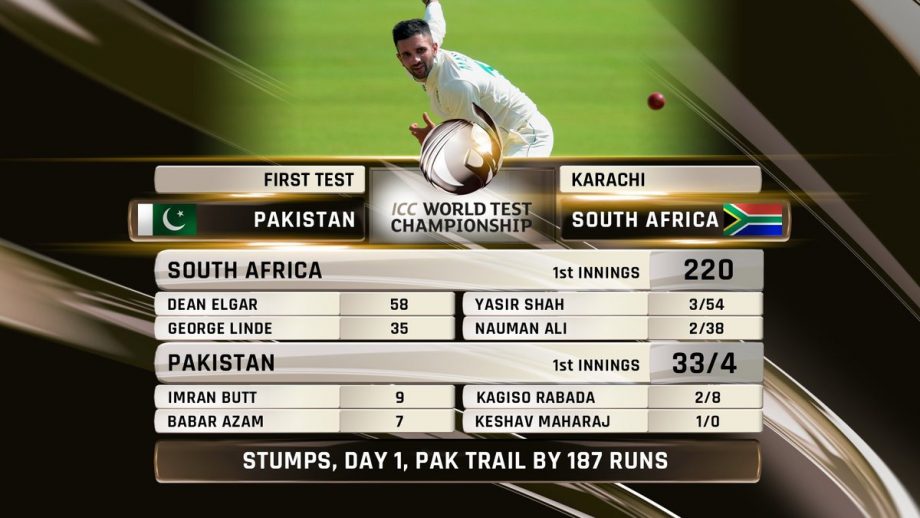 As we know, January 26, 2021, was a historic day for Pakistan as South Africa played their first international match in Pakistan after 13 years, last since October 2007 and it was a great day for both the bowling units.

The visitors won the toss early today and decided to bat first which did not prove a fruitful decision as they bundled out on 220 with a great job done by Pakistan spinners and pacers. In response, Pakistan ended up struggling on 33-4 at the end of stumps, day 1.

After having an International return in cricket, Kagiso Rabada shined at the end of day 1 after dismissing both the Pakistan openers cheaply, Abid Ali (4) was bowled out on an inswinger in the 5th over and the debutant Imran Butt (9) lost his wicket in the seventh over, gave an easy catch to the substitute fielder.

The left-arm spinner, Keshav Maharaj came in the 16th over to test his metal and luckily he got the big fish as Pakistan skipper, Babar Azam trapped in a straight lbw.

Pakistan sent the night-watchman, Shaheen Afridi to save balls for the day but he also could not stand long Anriche Nortje bowled him out in the middle stump.

After that, Fawad Alam came to the crease with his unique way of batting. He and Azhar Ali played the remaining overs on unbeaten 5 for each.

While batting, South African openers Dean Elgar and Aiden Markram gave a decent start but the debutant Imran Butt took a blinder in the slip to end Markram’s innings in the fifth over, leaving SA on 30/1.

Then Elgar and Rassie van der Dussen controlled the innings to steady a 33 runs stand for the second wicket but a misunderstanding cost them a wicket in a run-out. It was a tough run-out chance but Rizwan came up with brilliance to throw himself on the stumps to get Van der Dussen dismissed on 17.

South Africa were 94/2 before lunch, Elgar was standing on 46* and the skipper, Faf Du Plessis  on unbeaten 14.

Yasir Shah picked up Du Plessis immediately after lunch when he was caught behind on 23. Dean Elgar completed his half-century off 83 balls.

The debutant spinner, Nauman Ali did some magic in his back to back over after dismissing the skipper, Quinton De Kock (15) and Elgar (58), one after the other.

Temba Bavuma and George Linde tried to steady the ship but the crucial 41 runs partnership broke right before tea when Bavuma broke the sixth wicket stand to throw his wicket in a second run which was never possible.

Right after the tea, Yasir Shah struck to bowl out Keshav Maharaj for a golden duck.

After having a return back in International cricket for more than one and a half year, Hassan Ali picked up his one after dismissing George Linde on 35 runs.

Anrich Nortje was next on the list and he lost his wicket on a duck as Yasir Shah struck again.