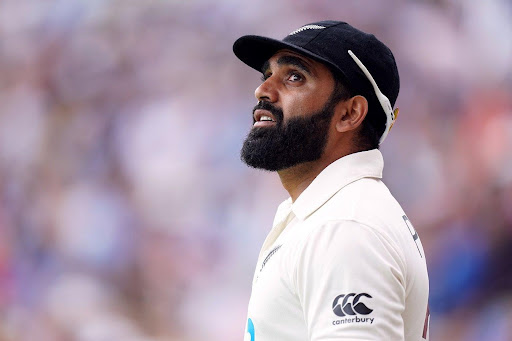 Ajaz Patel had picked 10 wickets in an innings against India while he has been dropped out of the Test squad against Bangladesh, is hopeful to fight for his place in the team.

He was not selected in the squad against the Bangladesh series but he is hoping that going forward, the country’s groundsmen would also prepare spin-friendly tracks to promote the craft.

The home pitches suited to traditional fast bowling friendly but the left-arm spinner said he will continue to fight for his place in the team.

“One of my things about being a spinner in New Zealand is to inspire another generation to take up the art,”

Patel was quoted as saying by ‘stuff.co.Nz’.

“I’m still going to fight the fight to make sure spin bowling becomes part of the big picture in New Zealand cricket.

“I think my job as a spinner is showing the groundsmen that there’s something possible, and then it’s up to the groundsmen to turn and around and go, ‘Well, actually, we want to see some spin bowling in New Zealand’,”

“It’s trying to drive that change. At the same time, we realize that our home conditions, it can be difficult to do that.”

Patel, 33, felt ideally the change can begin with domestic cricket.

“In domestic cricket, I think there’s space for groundsmen to experiment a bit. And I think it only helps us grow as players as well – one, from a bowling aspect, understanding how to bowl on those surfaces, but also from a batting perspective, learning how to cope with conditions that are different.”

Patel said his exclusion was expected keeping the conditions in mind but he is still a bit disappointed.

“It was more just expressing my disappointment because I think you still have to express yourself, and still be able to show that you’re passionate about playing Test cricket for New Zealand at home,”

“There’s a good relationship there with Gary (Stead), as well, we had some honest conversations, sometimes they’re not the most pleasing, but at the same time, we can be upfront with each other and know where we stand.

“Right now, we’ve got one of the best crops of fast bowlers that we’ve ever had in New Zealand. I guess it’s just part and parcel of the era of cricket that I’m in right now. It’s a great thing for New Zealand Cricket to have that conundrum.”

“…I do understand the reasons why they have gone the other way. But for me, it is still working towards that and trying to create that change.”

Patel said selectors have overlooked him for this upcoming series but it will only make him hungrier for more Test caps.

“That’s kind of somewhat been what my career’s been all about – every time I’ve faced a setback or a disappointment I guess the hunger grows and the fire in the belly gets bigger.

“So for me, it’s really about just going back and knuckling down and improving my game, and all facets of my game.”