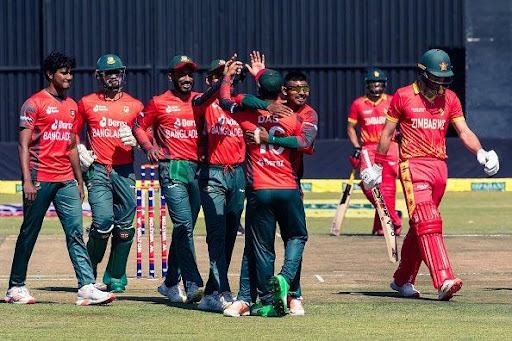 Mosaddek Hossain claimed his first five-wicket haul in the T20Is

Bangladesh all-rounder Mosaddek Hossain admitted on Sunday (July 31) that he never believed that he could ever pick up a five-fer in the T20Is.

Mosaddek Hossain claimed his first ever five-wicket haul in the T20Is against Zimbabwe at Harare on Sunday to help his side level the three-match series against the hosts.

On the way, he vanished all the doubts regarding his capability of bowling in the shortest format for Bangladesh and he looks like a serious candidate to earn the spot in the format even after the seniors returned to the game.

Bangladesh all-rounder admitted on Sunday (July 31) that he never believed that he could ever pick up a five-fer in the T20Is.

The 26-year old who returned to international cricket after the home series against Sri Lanka in 2022 after being through a rough patch in his career when he was excluded from the national side back in 2019 gained his faith shown by the selection committee that he has good batting skills alongside the fact that he can bowl four overs in the format.

”We didn’t expect that he would get five wickets but we are always confident that he can finish off his four-over quota due to the fact he bowls regularly at the domestic level. He doesn’t have that much turn but he knows his strength and can bowl in the same area without trying too many things,”

The all-rounder earned his spot back on the solid performances in the Bangabandhu Dhaka Premier Division Cricket League, the A list tournament where he scored 658 runs while he also claimed 16 wickets in 15 matches for Abahani Limited.

The former says that he is blessed to pick the five-wicket haul and feels proud to share the record with none other than Shakib Al Hasan. Apart from these spinners, Arafat Sunny and Mustafizur Rahman have picked five wickets in a T20I.

”There is not much to say about Shakib Bhai because everyone knows he is a legend. I am feeling fortunate that I have the same economy and five wickets as he has in T20s,”

Mossadek told reporters after the game.

”It could have been 19 runs or 21 runs and all I wanted was to end it on a good note and it eventually happened. I am extremely happy with the team performance,”

he said adding that he was only thinking of bowling dot balls.

”I did not bowl for five wickets and my only aim was to bowl dot balls. I am perhaps rewarded for bowling in the right areas. I am feeling extremely good and never felt that I will get five wickets. I just stuck to my plans. The management informed me that I will bowl at the start and we would begin our attack with spin bowling,”

”I have said this before that when I am given the ball I don’t think of myself as an occasional bowler because all the time I want to take the responsibility and bowl like the main bowler. If you see you will find that there was not much help in the wicket for the bowlers,”

”When the captain gave me the ball all I was thinking was to stop the flow of the runs because in the previous game they scored over 200 runs so we planned to restrict them to 160 to 170 runs and that was the only plan I was having because it would have been good for the team,”