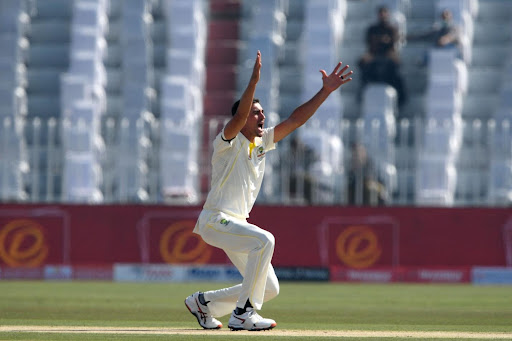 Mitchell Starc has put Australia in a comfortable position

Australia dominated from the start of day three while a weary Pakistan crumbled against persistent quicks Cummins and Starc who conjured spectacular reverse-swing as he hit speeds of near 150kph.

Australia dominated from the start of day three, with Cummins and Swepson adding a quickfire half-century partnership for the last wicket to frustrate Pakistan further. Cummins finally declared after 189 overs at 556-9 in their highest number of overs in an innings in Asia since 2000.

After Cummins won a crucial toss, Australia made the most of batting-friendly conditions in an innings dominated by Khawaja’s brilliant 160 off 369 balls in the city his family hails from while Carey with 93 and Smith with 72 notched half-centuries.

With plenty of runs on the board against exhausted opponents, Australia’s attack bounced back brilliantly after taking just four wickets in 217.1 overs in the first test amid a stale draw. In response to Australia’s marathon first innings of 556-9 declared, a weary Pakistan crumbled against persistent quicks Cummins and Starc, who conjured spectacular reverse-swing as he hit speeds of near 150kph.

While justifying his selection over Hazlewood, Mitchell Starc was rewarded for his rapid bowling with the wicket of first Test centurion Azhar Ali, who edged a full and wide delivery to Green at second slip.

He then had Fawad Alam lbw for a golden duck with a searing Yorker in the first delivery faced by the batter in the series.

Mitchell Starc, who went wicketless in Rawalpindi, almost completed a hat-trick when he beat Rizwan with a wonderful of a good length delivery that curved past the edge.

But Cummins removed Rizwan shortly after with a gem and was unlucky to finish with a solitary wicket.

Debutant leg-spinner Mitchell Swepson wasn’t greatly required but claimed his maiden Test wicket when he dismissed skipper Babar who mistook a well-flighted leg-break while his most important contribution was running out opener Abdullah Shafique with a brilliant direct hit to start Pakistan’s rot.

Babar played a lone hand as he batted through the type of carnage evocative of Pakistan’s woes in Australia during the past two decades. Underlining their batting horror show, tailenders Nauman Ali and Shaheen Afridi’s tenth wicket stand of 30 was Pakistan’s highest partnership of a feeble inning.

In their second innings, Australia reached stumps on day three at 81-1 with an overall lead of 489. Marnus Labuschagne and Usman Khawaja unbeaten on 35 as Australia capped an almost flawless day’s play to be well poised to draw first blood in this historic series, the first played between the teams in Pakistan since 1998.