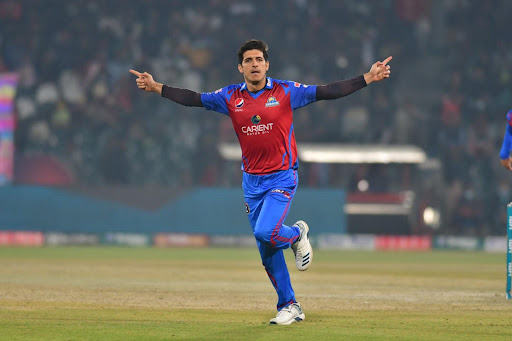 Karachi Kings won the game by 22 runs while an exquisite bowling spell from Mir Hamza with wickets both at the top of the order and the death saw the kings close out a low-scoring game.

Karachi Kings had won the toss and elected to bat first. Kings started the innings in a very bad way as they lost two wickets very early in the innings.

Then, Qasim Akram and Babar Azam try to play some sensational innings but couldn’t play long and their partnerships were also broken down by Rashid Khan.

Babar stumped the 11th over of the innings to Phil Salt, and the Kings once more began to look like the tepid, unimpressive side that couldn’t a single win before this match in the ongoing tournament.

Rashid Khan ripped through the lower order to leave the kings tottering at 116 for eight, they looked set to slump to yet another chastening defeat.

The recovery came initially through the little cameo of Lewis Gregory and he scored a 16 ball 27 to ensure that Kings would have something to bowl.

Karachi Kings has set a total of 149 after the end of their innings.

The chase began devastating for the Qalandars, with a mix-up between Fakhar Zaman and Abdullah Shafique seeing the latter out very early.

Mohammad Hafeez 24 ball 33 was the closest a Qalandars player came to steering the chase, but there was little support from the other end and an uncharacteristically disciplined bowling effort from the kings meant the Qalandars were being constricted out of the contest.

Harry Brook and David Wiese put on 55 for the sixth wicket as they tried to pull off a late heist, but they had been left too much to do.

It was Hamza who returned to kill the game off, removing both men inside three balls, and a criminally accurate final over from Jordan slammed the door shut in the Qalandar’s faces as they limped to 127.

It was Karachi King’s first win in the ongoing tournament after losing their eight consecutively matches but they had dropped out of the playoffs.

I did get an extra bounce which helped. The team intended to win for the fans of Karachi. While Wiese was playing, the focus was on length, even the discussion on field placement took a backseat as he was in form and classy enough to hit over extra cover. The Length balls were coming on and he was likely to get hold of them. So I went for slower ones and yorkers instead.

Credit to Karachi for playing good cricket. 150 was a gettable wicket but the team playing better won, and the pitch slowing down was not the reason for the loss. Losing wickets early was. Rashid has been good, so has Zaman who is a prospect for the Pakistani team. We will try to get into the top 2 and hopefully enjoy getting the journey along the way.

Congratulations to the team and the people who have kept supporting us. The wicket was good at the start of the game. We expected 170-180 but were 15-20 short. So, the plan was to get Fakhar and take it from there When some overs went for runs, the bowlers did bowl to plan. I tried to rotate the bowlers to not allow batters to get used to the action. At the death in the T20s, yorkers are important. The execution was good from Hamza and Jordan and that led to the win.