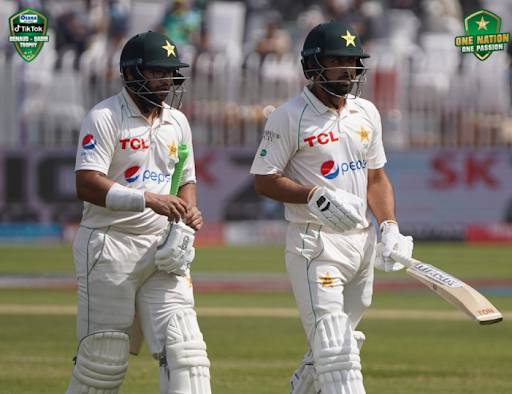 Imam and Abdullah hit centuries on the fifth day

Left-arm spinner Nauman Ali wrapped up Australia’s innings early on day five while Both openers Imam and Shafique hit centuries on a tedious fifth day to again grind Australia’s attack into the ground.

Left-arm spinner Nauman Ali wrapped up Australia’s innings early on day five with the wicket of skipper Cummins and Lyon to finish with a career-best 6 for 107 marked by eking out Smith and Cameron Green with defensive bowling late on day four.

Energetic Shaheen Afridi, who was the standout quick in the match, was rewarded with the wicket of Starc to finish with 2 for 88 from an energetic 30 overs.

Australia will be encouraged by their fight back with the bat to almost reach Pakistan’s huge first innings of 476 for 4 although none of their batters score a century. They also lost 6 for 52 after appearing favored to take the first-innings lead after such a strong start, where Australia’s top four notched half-centuries in an overseas test for the first time since 2008 in Delhi.

In form Imam and Shafiq were intent on gaining a psychological edge heading into the second test starting on March 12 on a wicket labeled as “dead” by Steve Smith and is set to be further put under the microscope post-match.

Having nervously sat through tea on 99 not out, after being unable to notch his milestone off part-time spinner Travis Head’s last three balls before the break, Shafique scored off the first ball he faced on resumption to bring up his maiden test century in his third match.

Imam survived on 94 when replays showed he inside-edge a Nathan Lyon delivery to short leg only for Australia to resist reviewing the not-out decision the second time in the match the batter had been acquitted by Pat Cummins reluctance to call for the DRS.

Both openers hit centuries on a tedious fifth day to again grind Australia’s attack into the ground on a benign Rawalpindi pitch, as the first test failed to a stale draw. Pakistan finished at an almost effortless 252 for 0 with Shafique 136 not out and Imam unbeaten on 111.

“Turning up to a pitch that’s probably not a traditional pitch you would get here in Rawalpindi, and it’s probably clear they’ve made an effort to try and nullify the pace bowling,”

“I think that’s a positive. And, sub-continent conditions, coming away with a draw it’s not a bad result.”

“I think we all tried different things,”

“I think all the quick bowlers, although we’ve spent the best part of three days out in the field, I think we’ve all bowled around about 25, maximum 30 overs each, which in comparison to a lot of Australian Test matches is a pretty light workload.

“Didn’t get a huge look at reverse swing this Test, but that might come into it later on. But I was really happy with how everyone went and everyone’s come through unscathed.”