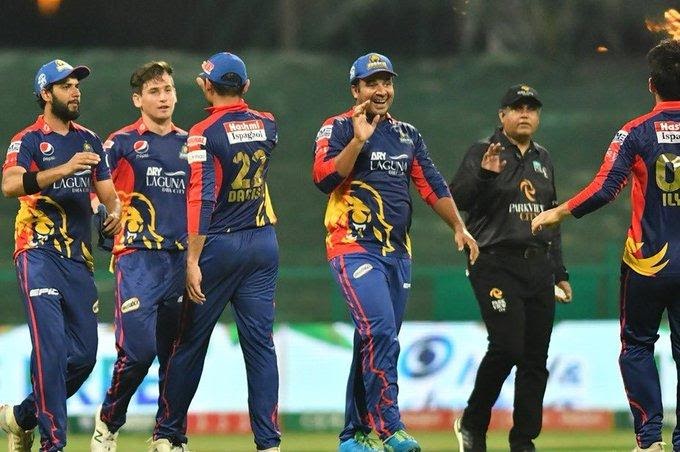 Karachi Kings keep their hopes alive in the tournament after defeating Lahore Qalandars in a close contest by 7 runs at Sheikh Zayed Cricket Stadium on Thursday.

Karachi still has the chance for playoffs after Noor Ahmad (2-19-4) bowled an incredible spell to mark the fourth victory for Kings.

Karachi after winning the toss decided to bat first, Babar Azam (54) and Martin Guptil (43) set the pace for Kings’ to reach 176/5 in the allotted overs with their 88-run stand.

KK lost Sharjeel Khan earlier but Babar and Guptill steadied the ship from there. There was a sudden collapse after Mohammad Hafeez and Rashid Khan struck in 16th over bend KK from 109/1 to 132/5.

Imad Wasim (30 off 19) and Danish Aziz (16 off 10) produced some serious hitting at the end to get the score across 170. LQ being sloppy on the field as they dropped many chances including three catches of Babar.

Fakhar Azam started well after striking two sixes in the first over but then he found it tough to get going. Ultimately, he lost his wicket on 19 off 26 as he could not add rhythm.

Mohammad Hafeez on the other hand was trying his luck and getting fail. He also got second life but he did not get benefit from it and gave an easy catch on 36 off 36.

Noor Ahmad’s continuous strikes and the unlucky run out of Agha Salman took Lahore to 92 for 5 in 14 overs.

Tim David was merciless at the moment and he turned his side’s fortune with his 34 off 14 as James Faulkner (33 off 18) too showed some serious power-hitting. Their 58-run stand-off just a few overs left the Kings in serious trouble.

But Abbas Afridi turned the match completely after a crucial breakthrough on the last ball of the 18th over as he dismissed David on a slow delivery, Qalandars were 27 runs away. Faulkner fell in the final over as Rashid Khan and Shaheen Afridi failed to close the chase.

“I think we were 20 runs short, to be honest. It was the pressure of the wickets. The bowlers bowled well, according to the plan, and it came off. It’s the end of the tournament and you should peak at the right time.

We have one more game and if we win, we go through. We are in the right frame of mind. We lose three games, it was disappointing. We stood and up spoke in the team meetings,”

“I think the batting was alright. After the powerplay, for 6-7 overs, we had a bad time. Overall we were alright. But we had lapses in the field that cost about 20 runs. Noor and Imad bowled good spells.

The spin overs in the middle – if we went even run-a-ball, we would’ve done this. Our bowling’s going well. Batting is where we’ve had problems. Having said that, the middle order has done slightly better in the last two matches, so we’ll take that forward,”