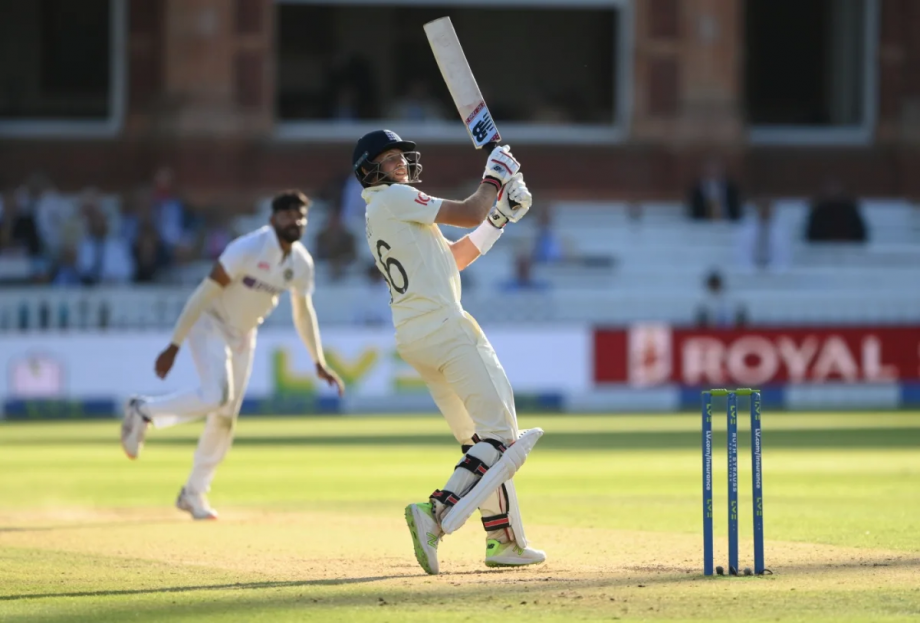 England captain Joe Root remained unbeaten on 180 to help his team take a small lead of 27 runs against India in the first innings of the second cricket Test match being played at Lord’s, on Saturday. In reply to India’s first innings total of 364, England did extremely well to fight back with the bat after staging a comeback with the all to get ahead in the contest by scoring 391 in their first innings.

Root scored 180 not out from 321 balls with the help of 18 boundaries as England made a strong statement that they will not be pushed over by a strong unit which is India. It must be remembered that England are without several of their frontline players and depend entirely on the captain Root to lead them with the bat.

After resuming their first innings at 119-3 at start of the third day on Saturday, Jonny Bairstow did extremely well to make 57 from 107 balls with seven boundaries while Root dropped anchor at the other end and held the England innings together.

After opening batsman Rory Burns, who fell for 49 at the end of the second day, added 85 runs for the third wicket with the English captain, Bairstow teamed up with Root to add another 121 runs for the fourth wicket which powered a strong reply from the home team.

Bairstow was dismissed by Mohammad Siraj who went on to take a total of four wickets in the English innings, but Root found another partner in Jos Buttler, who scored 23 from 42 balls but added another 54 runs to keep England ahead.

England all-rounder Moeen Ali, who is coming back into the side after a long break from Test cricket, did well to make 27 from 72 balls and add another 58 runs with Root to take England close to the Indian total in the first innings.

It was a day which promised plenty for the batsmen and Englishman did well to make the most of it. The Indian bowlers were made to work extremely hard for the wickets, and despite trying their best for about two sessions, they finally were able to take a lot of wickets towards the ending stages of the day.

The senior India fast bowler Ishant Sharma took two wickets in as many balls of Moeen and Sam Curran to bring India back into the contest, but the visiting team could not prevent England from taking a small lead of 27 runs in the first innings.

James Anderson was the last man to be dismissed in the final over of the day, which means that India will now have the last two days of the second Test if they have to force a result in the contest.

Siraj took most wickets for India as he claimed 4–94 from his 30 overs whereas Mohammad Shami took 2-95 and Ishant claimed 3-69 from his 24 overs. Mark Wood was the only English batsmen to be dismissed in their first as Ravindra Jadeja remained wicketless in his 22 overs.