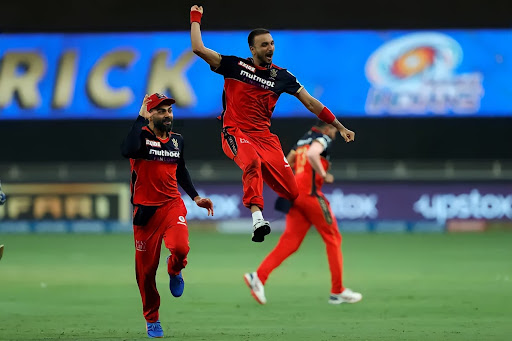 RCB got off to a bad start as Kohli was dropped by Rahul Chahar in the first over followed by the dismissal of fellow opener Devdutt Padikkal for a duck. Srikar Bharat came in at No.3 and Kohli’s heroics in the powerplay overs once again settled the nerves of the RCB fans as they reached the score of 44/1 after 5 overs.

As Kohli brought down his run rate, the wicket-keeper batsman kept striking the ball hard to the boundary before perishing to a loopy delivery from Rahul Chahar.

Maxwell came in at No.4 and he along with skipper Kohli steadied the run-flow with the Australian hitting the ball to the fence regularly whilst the Indian captain brought up his second consecutive Indian Premier League half-century followed by his dismissal when Bangalore was set for a big finish at 126/3 after 15.5 overs.

AB de Villiers hit a six and a four against Jasprit Bumrah whilst Maxwell went beserk against Adam Milne to collect 30 runs from two overs. In the 19th over, Bumrah dismissed both power hitters off consecutive deliveries halting Bangalore’s score at 165/6.

With the new ball coming on nicely on to the bat, MI openers Rohit Sharma and Quinton de Kock were elated in the powerplay overs as they ended up scoring 56 runs in 6 overs without losing a wicket. When the field spread, Yuzvendra Chahal sent the South African back to the pavilion in the 7th over followed by Maxwell dismissing skipper Sharma for 43 in the 10th over.

Ishan Kishan has flustered so far in this season of the IPL and the surprise inductee into India’s World Cup squad was dismissed cheaply once again by Chahal. Krunal Pandya and Suryakumar Yadav continued the trend of following their skipper back to the pavilion as MI’s middle-order packed like a deck of cards.

In the first three balls of the 17th over, Hardik Pandya, Keiron Pollard, and Rahul Chahar became the three victims of Harshal Patel’s first hat-trick in the IPL.

RCB solidified their hold on the third position as Chennai Super Kings defeated Kolkata Knight Riders earlier in the day in a last-ball win to go top of the IPL 2021 points table.