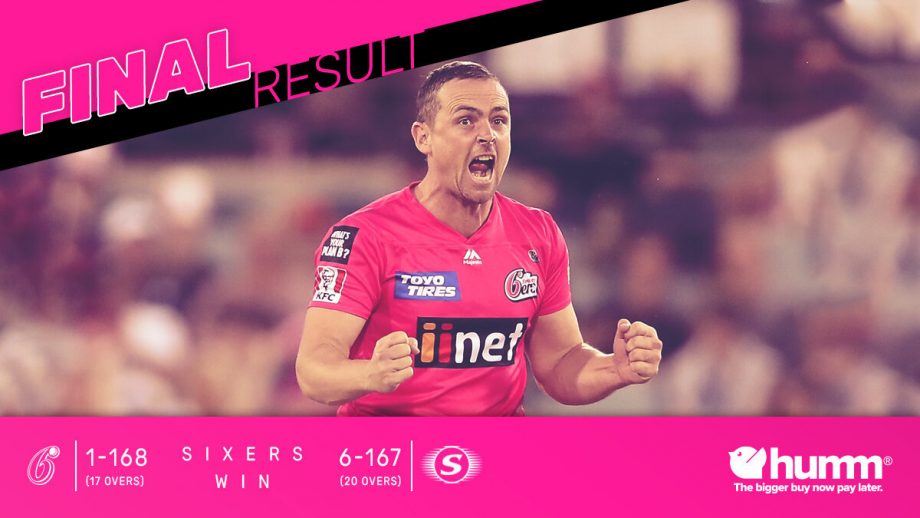 James Vince missed his marvellous ton by 2 runs but still took the charge to take his side, Sydney Sixers, reserve the rights to host the final of BBL season 10 on Saturday night at Manuka Oval.

The Sixers were cruising towards the victory over Perth Scorchers on Saturday night with the only question being unanswered that if James Vince would be able to complete his century.

But, not every story has a happy ending because when the Sixers needed one run to win, AJ Tye bowled a wide-ball to end the hopes of Vince in despair.

“Reckon there might be a bit of needle if these two meet in the final.”

“No one can tell me that he didn’t mean to do that … Poor form from AJ Tye.”

Tye immediately apologized for the tennis ball bouncer when Vince gave him a blank and disappointed look.

Asked on Fox Cricket after the match what Tye had told him, Vince said:

“I don’t know. It almost hit him on the toe, it was pretty short. Well, I hope he didn’t mean it anyway.”

While there will be controversies for Tye to explain the delivery, it was Vince’s teammate Daniel Hughes that made the century equation a tricky one in the first place.

After getting a strike, Hughes hit a boundary for four when there were 5 runs required, leaving only one run to chase for Vince.

He then blocked the remaining three balls for dots to pass the strike to Vince so that he would complete his second T20I century off Tye which ended up in a wide-ball.

Earlier today, Perth Scorchers won the toss and opted to bat first and they only managed to post an average total of 167-6 which Sixers chased down easily with 18 balls to spare.

James Vince was named as man of the match after Tye dropped him on 24, which cost them a blistering knock when Vince winded up the innings on 98* (53).

He showed pure class alongside Josh Philippe’s decent 45 off 28 balls. The deadly combo made light of the run chase, sending Scorchers to fight another battle as semi-finals against the winner from Sunday’s knock between Sydney Thunder and Brisbane Heat.

Meanwhile, Sixers can breathe until they host the final of BBL season 10 in their home ground at MCG on Saturday.

In the first innings, Sean Abbott removed Jason Roy on 3 who is the dangerous candidate of Scorchers, caught and bowled on the second ball he faced.

Scorchers then made a steady partnership but Jackson Bird removed this partnership which was growing dangerously, Colin Munro caught on the boundary by Jordan Silk after scoring 30 runs.

Mitch Marsh then got dismissed on 2 runs after he edged one down the leg side off  Stephen O’Keefe’s ball. Philippe and O’Keefe shouted a strong appeal as the finger was raised. Marsh walked out after giving an angry look to the umpire as he was furious with the decision.

Ashton Turner did some hitting to keep the scorecard moving with his 33 off 22 balls, but the star from Scorchers was Josh Inglis who finished with 69 off 41 balls to set a decent total for Scorchers.

There is no doubt that Scorchers fell a bit short of an ideal target as they posted only 167-6 in 20 overs. Sixers made that true after chasing the target swiftly in the second innings of the game.

In response to the Sixers young gun, Philippe opened the innings with a bang to hit 12 runs off first four balls off Jhye Richardson who is the top wicket-taker of BBL season 10.

That set the tone of Sixers as Philippe alongside his partner James Vince to pour an outstanding 92 runs stand for the first wicket.

By the sixth over, Scorchers desperately needed a breakthrough and the chance arrived when Vince lofted the ball to clear the rope when he was on 24.

But Tye could not hold the catch which gave Vince another chance to test his metal. He destroyed Scorchers with his batting to prove that dropping a catch may cost the match.

“It’s a little bit awkward over his head but he got a pretty good look at it in the end and, quite frankly, he got nowhere near catching it … you’ve got to catch that,”

“That’s regulation. And it’s so important because it gets Daniel Hughes in, a new batsman who typically takes a bit of time to get going … it’s a bad miss.”

The drop served as a green signal for Sixers to put their foot on the throat of Scorchers, hit 33 runs from 14 balls that happened right after the drop.

“Completely rattled, aren’t they, the Scorchers,”

Adam Gilchrist said at the time.

Finally, Scorchers managed to pick up the first wicket as Philippe caught at short fine leg off the bowling of Livingstone but at that time the equation went down to 76 off 67 balls and Vince was just out of control.

Vince continued to pay Scorchers for their drop bringing up his fastest half-century which came off only 26 balls and then falling just short of 2 runs to complete his blistering ton.