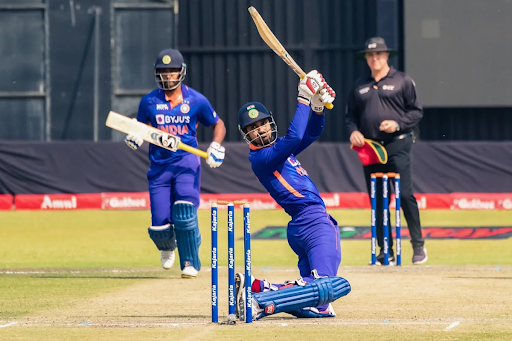 In yet another low-scoring but slightly more entertaining and competitive second one-day international played at the Harare Sports Club on Saturday, India defeated Zimbabwe by 5 wickets to seal the series 2-0 with one match to spare.

Chasing a paltry target of 162, India stuttered in the middle but eventually got past the finish line in the 26th over with half their side back in the hut.

The Indian fast bowlers were the architects of the big victory in Harare with all of them chipping in with wickets, led by all-rounder Shardul Thakur, who was a little expensive but returned with impressive numbers of 7-0-38-3.

Among the other wicket takers were Mohammed Siraj, Prasidh Krishna, Akshar Patel, Kuldeep Yadav and Deepak Hooda, who all claimed one wicket apiece.

For that matter, Deepak Hooda has created a unique world record for India as he became the first player in the history of cricket across formats to have featured in 16 consecutive matches won by his side.

The batting all-rounder also played a handy knock of 25 from 36 balls studded with 3 boundaries later in the game to help India go past the finish line after they had lost more wickets than they would have liked in the middle overs of the chase.

Sean Williams and Ryan Burl were the batting stars for Zimbabwe on Saturday as they played crucial knocks that pushed the teams total past the 150-run mark. Sean Williams made a run-a-ball 42 studded with three boundaries and a six whereas Ryan Burl made 39 not out from 47 balls with as many sixes and boundaries in yet another impressive outing.

In the chase for India, the opening partnership was broken early in this game by the Zimbabwe bowlers when Victor Nyauchi struck to dismiss their captain KL Rahul for just 1. India vice-captain Shikhar Dhawan carried on with his rich form with the bat, stroking 4 boundaries to make 33 from just 21 balls to provide impetus to his team’s cause in the company of Shubman Gill, who also scored 33, but from 34 balls and six boundaries.

Ishan Kishan had a failure with the bat on Saturday when the left-handed wicket-keeper batsman played one on to his wickets of Luke Jongwe to be dismissed for 6, which at one stage left India struggling at 83/3 followed by 97/4, with Shubman Gill also being dismissed by the same bowler.

However, India found a strong pair in the middle in the form of Deepak Hooda and wicket-keeper batsman Sanju Samson, who took their side closer to the target. Sanju Samson was belligerent on the Zimbabwe bowlers, striking four sixes and three boundaries to make an impressive 43 not out from just 39 balls and he finished the game in the company of Akshar Patel, who was on 6 not out when winning runs were scored.

The third and final ODI between these two sides will be played at the same venue on Monday, August 22.