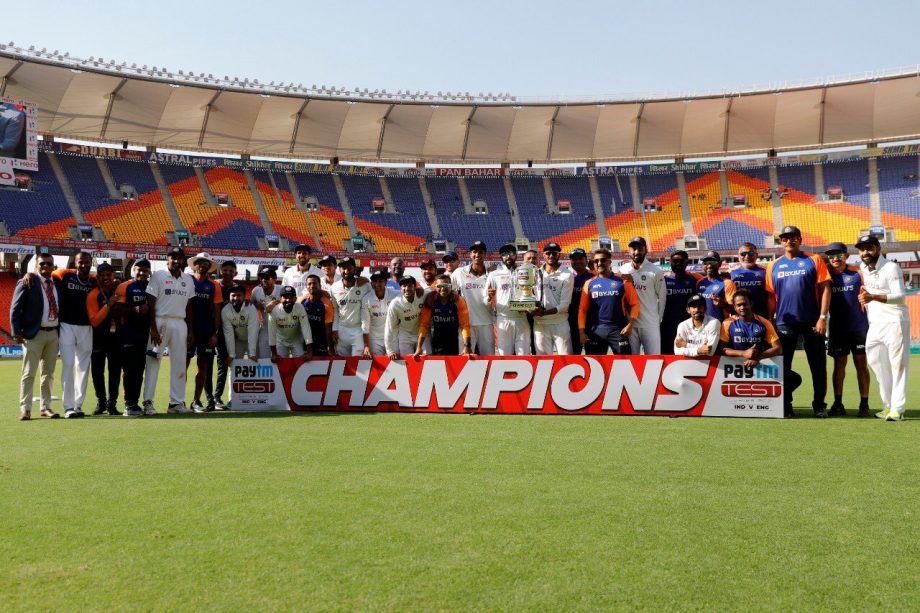 The depth and skillset of this Indian cricket team proved to be beyond the capabilities of the touring England side to match as the Virat Kohli-led team completed a 3–1 series victory in the four-match series to grab the Anthony de Mello Trophy, and secure a place in the final of the ICC World Test  Championship , on Saturday at Ahmedabad.

India defeated England by a huge margin of an innings and 25 runs inside three days to complete their third Test victory on the trot after losing the first Test at Chennai. India had won the previous two Test matches by heavy margins of 317 runs and 10 wickets respectively to take an unassailable lead going into the final Test  of the series.

India found heroes once again in their young talent as a superb century from Rishabh Pant, a breathtaking knock of 96 not out from Washington Sundar and his century partnership with India’s latest  sensation in Akshar Patel out-batted England in their only innings in the final Test. Their knocks propelled India’s lead in their first innings beyond the horizon for Joe Root’s side.

Earlier on the first day, India had dismissed England for 205 in their first innings and they themselves were struggling at one stage when Pant and Sundar got together to put on 113 runs for the sixth wicket. After the partnership was broken eventually, Sundar went on to add another 106 runs with Patel to prove that the depth of this Indian cricket team is beyond anyone’s comprehension.

Pant produced an innings of highest quality, hammering 2 sixes and 13 fours to make 101 from 118 balls whereas Sundar was equally animated in his knock, smacking 1 six and 10 fours to get to 96 not out from 174 balls. Sundar was unfortunate to have missed his century as he was stranded on 96 not out having run out of partners.

The task for England, batting in the third innings on the third day of the Test on a relatively fresh wicket, was to dig in and not allow Indian spinners to dominate them once again. Unfortunately for the visiting side, their batsmen displayed absolutely nothing in terms of resistance and character. England were bowled out for another embarrassing total of 135, with Ravichandran Ashwin and Patel claiming 5 wickets each to run through their opponents.

The victory propelled Indian cricket team into the final of the ICC World Test  Championship, which is slated to be held from June 18-22 this year at a venue in England which will be announced by the global cricket governing body soon.