India clinches the ODI series on a 2-1 count: Player ratings from England’s home defeat against India 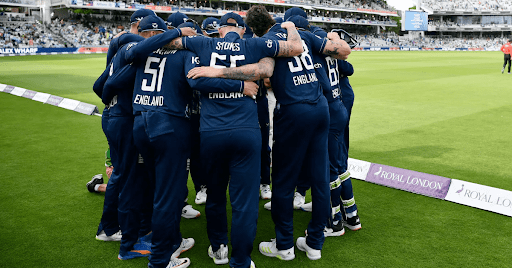 Jos Buttler and company put up a brave fight but it wasn’t enough to reclaim the ODI series as India registered their first 50-over format triumph on English soil since 2014. It was a roller-coaster ride for the Three Lions where they eventually ended up on the losing side but learnt many valuable lessons from the despondent defeat. Hence let’s take a look at the player ratings and detailed performance report of Team England from this series.

Jason Roy (5/10): Roy’s dreaded run in International cricket continues as he also fails to make any differences in the ODI series after a forgettable campaign in the shortest format. The Royal London Cup commenced when Roy’s dismissal by Jasprit Bumrah in the second over became the first wicket of the series. The 31-year-old Surrey opener then became the victim of Hardik Pandya’s brilliance despite getting good starts in the following two fixtures.

Jonny Bairstow (3/10): The English fans had huge hopes from the man in form who returned to the Three Lions side after heroically saving the red-ball series against the same opponent. Bairstow failed to stand tall in front of the wrath of Indian opening bowlers twice in the series and could cross the double-digit mark only in the second game. In the Lord’s fixture, the Yorkshire explosive batter gave a fine start to the English innings by scoring a run-a-ball 38 runs before becoming the victim of Yuzvendra Chahal’s spin web.

Joe Root (1/10): Root returned to the 50-over format after a halt of one year but his comeback in the One-Day Internationals did not age well as he couldn’t even make it to the Top 10 highest run-scorers of the Royal London ODI Cup.

The former English skipper could fetch only 11 runs from the three appearances in his returning white-ball campaign. The current ODI form of England’s Birmingham Test hero is a worrying sign for the English gaffer Matthew Mott as Root got out on the duck twice in the series.

Jos Buttler (7/10): Buttler’s search for the maiden breakthrough in the international circuit as a captain continues as he ended up on the losing side against the Men in Blue in the 50-over saga as well. His first assignment as a full-time English ODI captain commenced with a ten-wicket defeat at the hands of the Indian side in the opening fixture. He was the only batter in that English innings who touched the thirty-run mark as the Three Lions got dismantled on the final total of 110. 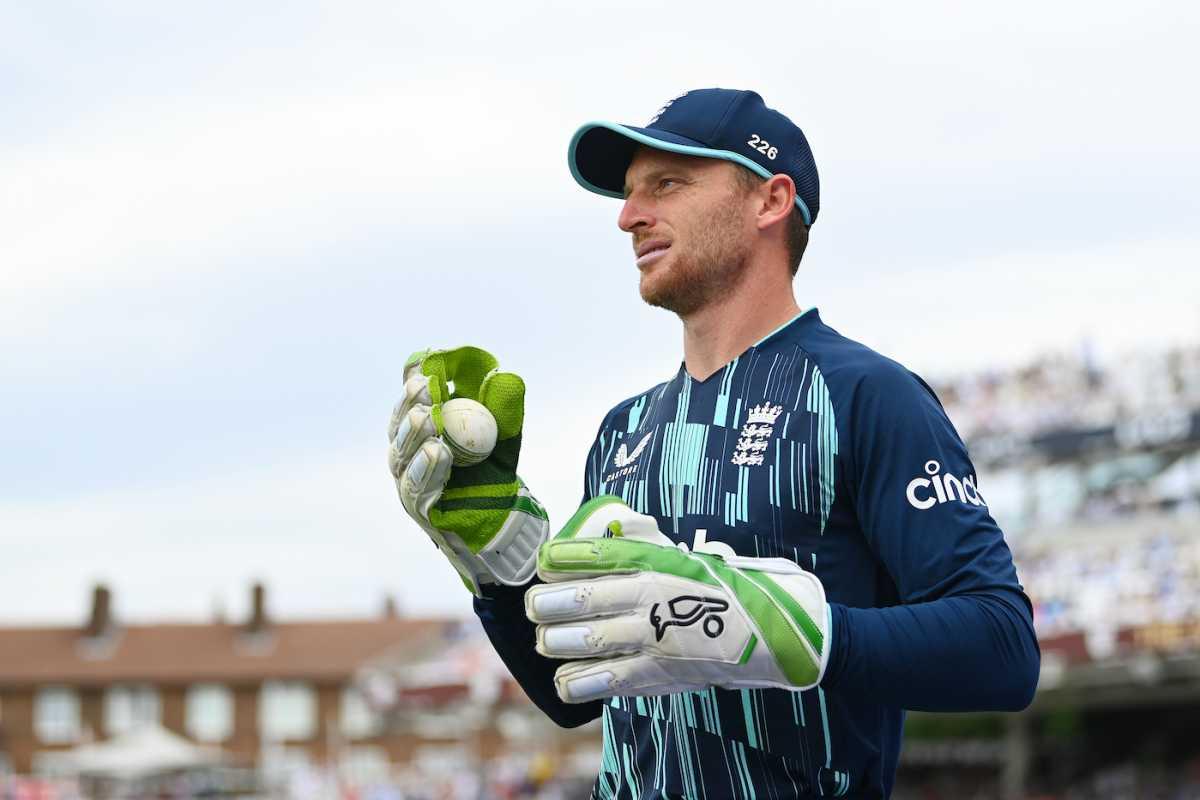 In the deciding encounter, Buttler delivered a robust knock of 60 runs off 80 balls and had the lion’s share in the English innings reaching out to a respectable total of 259 to keep them alive in the do-or-die fixture. Interestingly, it was the only instance when an English batter celebrated his individual landmark as all other big names failed to score even a single 50+ mark in the series.

Liam Livingstone (6/10): Another big name who was carrying huge hopes of English fans but could not perform accordingly. He had an intense one-on-one battle with Hardik Pandya as the India all-rounder kept his length short against Livingstone while the Lancashire batter also whacked for a couple of big hits although the last laugh went in the favour of the braveheart bowler on both occasions. Liam was the fifth-highest scorer for the English camp in this series with 60 runs from three games and also fetched a solitary wicket from the bowled four overs.

Moeen Ali (7/10): It’s quite a surprising fact that despite the presence of many elite batters in the English camp, the 35-year-old all-rounder emerged as the leading run-scorer in this bilateral series for the Three Lions. Ali’s most notable batting contribution came in their Lord’s triumph when he had a 62-run partnership with David Willey for the seventh wicket and displayed a great fightback against the Indian bowling unit.

His bowling contribution was something that the English skipper was expecting more although Ali remained off-colour with the ball and could pick only a single wicket from three appearances.

David Willey (6/10): The 32-year-old limited-overs specialist is gradually transforming himself into a prominent white-ball all-rounder due to his recent heroics with the bat. Willey could only pick a single wicket from this series but turned hard with his willow after emerging as England’s third-highest run-getter of the series with 80 runs under his helm.

He scored runs in each and every fixture of the series and always his batting saved the English tail from a quick roll-up in the final stages of the innings, especially in the Lord’s victory where he held one end for a long period.

Ben Stokes (3/10): It was Stokes’ first 50-over series after taking over the captaincy in red-ball cricket as many speculations were arising about his new approach but unfortunately things didn’t go how the talismanic all-rounder must have planned them. He was one of those three English batters who returned to the pavilion without opening their runs account in the first fixture of the series. Stokes got good starts in both following fixtures but failed to transform it into a big one while surprisingly only bowled three overs in the entire series.

Reece Topley (9/10): After a great individual outcome from the T20I campaign, Topley delivers a fine performance for the Three Lions in the 50-over series as well. It seems like England’s search for a stalwart seamer ends with Reece Topley emerging as their frontline bowler in this series. The hero of England’s only victory in the T20I series replicates the same feat and tops the wicket-taking charts of the 50-over campaign with nine wickets from three games. 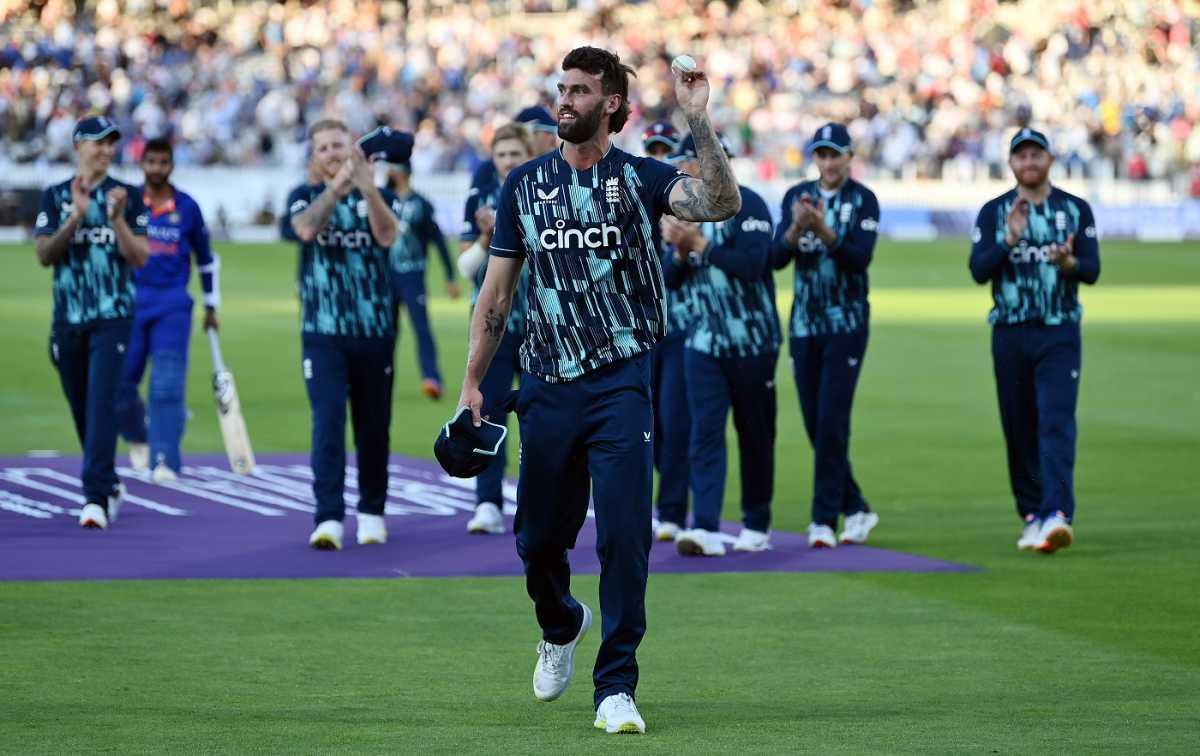 Reece Topley is in his own league

The 28-year-old Surrey pacer starred in their Lord’s triumph where they restricted India on a total of 146 and he was adjudged Player of the Match for his match-defining figures of 6 wickets while spending away only 24 runs in 9.5 overs.

Even in the decider fixture, Topley gave a great start by dismissing the Indian Top 3 inside the first powerplay although the other English bowlers couldn’t join the bandwagon as the Men in Blue eventually emerged victorious.

Craig Overton (5/10): Overton had a golden opportunity to perform in this series and cement his place in the ODI setup for a long time but the Somerset pacer failed to grab it with both hands.

Suryakumar Yadav’s caught-behind dismissal in the decider fixture was Overton’s only wicket in the series and moreover, his bowling figures remained economical only in the second ODI out of three matches. In that game, Overton also excelled with his willow by playing crucial innings of 32 runs and also smacked Yuzi Chahal before getting dismissed by the same bowler in the same over.

Brydon Carse (4/10): The 25-year-old right-arm pacer got smacked for big hits by the Indian openers during the first ODI of the series as he registered figures of 0 for 38 in 3.4 overs with a steep expensive economy rate of 10.4 runs per over.

Carse picked the vital wicket of the dangerman Rishabh Pant on the duck to ensure England’s comeback in the ODI saga to level it up by 1-1. He then went on to dismiss Hardik Pandya who was marching high towards the victory which could have been the game-changing moment of the match but Pant had other plans in his mind.

Mukesh Kumar received a maiden call-up in the Indian squad