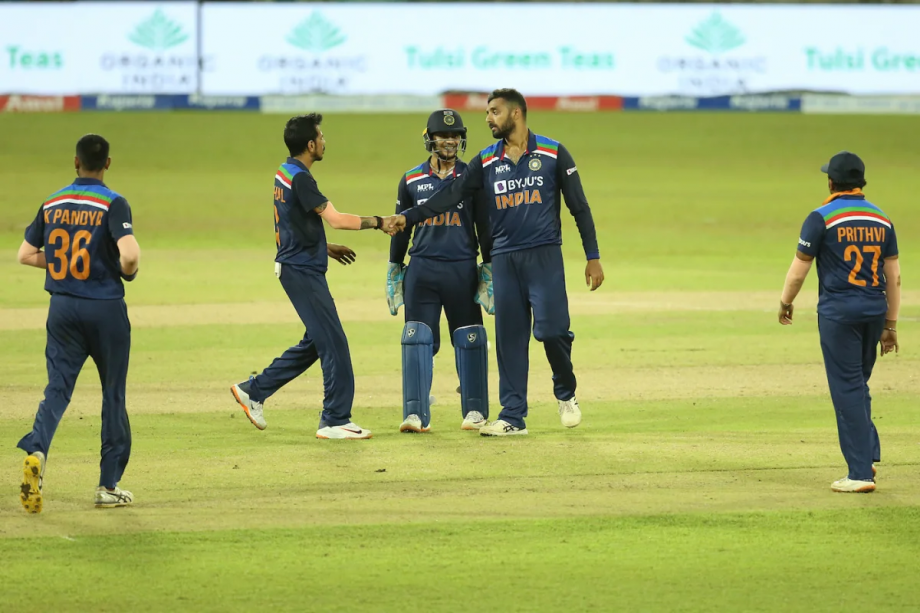 India took a 1-0 lead in the three-match series

India held their act together better than Sri Lanka despite being restricted to a moderate total, to record a 38-run win in the end of the first T20I cricket match played at the R Premadasa Stadium in Colombo on Sunday night.

Chasing a target of 165 in the first contest of the three-match series, Sri Lanka were bowled out from 90/4 at one stage to 126 all-out in 18.3 overs, with Indian experienced bowlers Bhuvneshwar Kumar and Yuzvendra Chahal producing impressive bowling performances on what turned out to be a perfect wicket for T20 cricket at the Colombo stadium.

India were overall the better side among the two, with Suryakumar Yadav leading their charge after an early dismissal in form of Prithvi Shaw and Sanju Samson falling after a promising start. Suryakumar scored the only half-century of the match, an innings of 50 from 34 balls with 5 fours and 2 sixes which pushed India’s total to 164/5.

India captain Shikhar Dhawan was among runs too, scoring 46 from 36 balls with the help of 4 boundaries and 1 six in an innings wherein he played the role of an anchor as well someone who looked for quick runs. Dhawan was involved in two crucial partnerships — first with Samson for the second wicket in which they added 51 runs, and then for the third wicket with Suryakumar, in which the two Indian batters added 62 runs.

Sri Lanka were impressive in patches, if not overall in the first half of the game. They did not allow India to get away easily at any stage in the game, controlling the pace of the visitors’ scoring while also not allowing any width for them to free up their arms. The home team was very impressive in the last 7-8 overs of India’s innings, in which the visiting team was forced to look for runs and could not put on an intimidating total on the board.

In reply, Sri Lanka needed a strong performance with the bat but their batsmen disappointed once again. Avishka Fernando and Minod Bhanuka could add only 23 for the first wicket, and the former could only manage another 25-run stand for the second wicket with Dhananjaya de SiIva.

Once again, it was a strong batting performance from Sri Lanka cricketer Charith Asalanka, who kept the home team in the contest for as long as he was there in the middle. The left-handed batsman smacked 44 from 26 balls with 3 fours and as many sixes to give Sri Lanka a glimmer of hope, but India bowlers ensured that their team was on the winning end.

Deepak Chahar returned to the Indian side after missing the third and final ODI to haunt Sri Lanka once again, this time with the ball as he dismissed Asalanka and Wanindu Hasaranga inside one over to put Sri Lanka completely on the backfoot. The home team could never really recover from the two blows.

Bhuvneshwar was declared the man of the match for his impressive bowling figures of 3.3-0-22-4. Chahal was equally good as he claimed 4-0-19-1. India debutant Varun Chakravarthy, Krunal Pandya and Hardik Pandya took one wicket each.