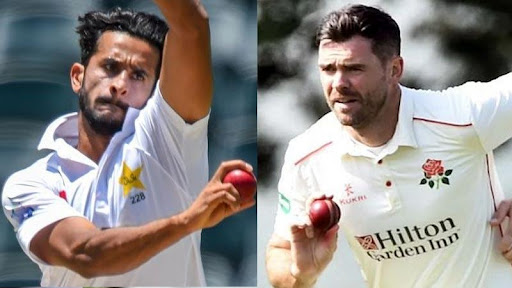 Pakistan pacer Hasan Ali has touched down in Manchester, where he will be representing the Lancashire County for a 2022 County Championship as an overseas player.

Hassan Ali will be available for the first six matches of the 2022 County Championship for the Lancashire. The right-arm pacer is eyeing to pick the brains of the veteran England pacer James Anderson and said that he will be asking a lot of questions to the legendary pacer.

Pakistan pacer Hasan Ali has touched down in Manchester, where he will be representing the Lancashire County for a 2022 County Championship as an overseas player.

While speaking with the club on the press day, Hassan told ESPNcricinfo that he would take a lot of wickets and that he was excited to be back at the Emirates Old Trafford, the ground where he made his T20I debut in 2016.

“Honestly, it’s too cold for me,” he said, laughing.

“But yeah, I have to adjust. I would like to thank the Lancashire management for the opportunity. I’m very excited and looking forward to sharing the dressing room with their players; obviously, we have Jimmy Bhai, and Jimmy Anderson, so I’m very happy and very excited.

He also talked about the conversation he had with Saqib Mahmood, one of his teammates in the Peshawar Zalmi, Pakistan Super League (PSL).

“Saqib spoke with me this morning,”

“He told me the ball reverses here. We know how to reverse the ball as Pakistan bowlers, since childhood, we used reverse-swing because they’re tough conditions for the bowlers in Pakistan, dry conditions. It’s similar here. I know the weather is chill, but the square is dry and the wicket is dry so hopefully [I will] get some reverse.

“I played with Saqib Bhai for Peshawar Zalmi. He’s a good guy, an exciting player. He just got his Test debut and I’m happy for him. [In the 2021 PSL] he was the best bowler when he left the team. He couldn’t come back [for the second half of the season in the UAE], but he’s a good player.

“I’ve been coming here [for] six years. My first tour here was in 2016 – I made my T20 [international] debut on this ground and I know about English cricket. I’ve played a couple of games here, in the World Cup and T20s. The ball does reverse here and I like to reverse the ball.”

Many Pakistani players are in-demand for the 2022 season as Babar Azam-led players won’t be featuring in any International fixture in the next two months.

Hassan Ali believes that it will be a good opportunity for the players to gain some valuable experience.

“We have nine or ten players who are going to play this season and I think that’s a very good thing for us as a unit. We’re going to get a lot of experience from here and we’ll put it into our domestic and international cricket.