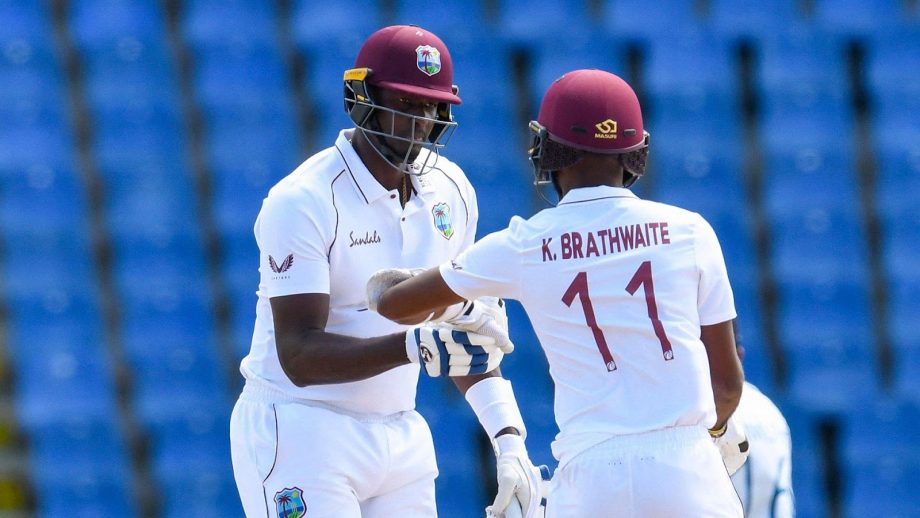 Kraigg Brathwaite and Jason Holder took West Indies out from the terrible position of 2/2 before the end of stumps day 1. Brathwaite remains unlucky on 97 however the duo combined a remarkable partnership to get WI in a strong position.

West Indies skipper, Jason Holder, and Kraigg Brathwaite gave solid support to the West Indian batting line-up after a terrible loss of 2 wickets before the end of day 1.

The duo combined a solid partnership to get West Indies in a position with a lead of 34 runs and 2 wickets in hand at the end of day 2 of the first Test against Pakistan at Jamaica.

Even though the clouds were not visible on Friday but still the condition of the pitch had something to keep Pakistani bowlers at interest in the morning session.

West Indies badly needed someone to take responsibility for that position and Brathwaite just did that. He builds two crucial partnerships for his team every time they lost a wicket.

First, he stood a 50 runs stand with Roston Chase before tea and then a partnership worth 96 runs with the skipper to get WI in a position of having the lead.

The pitch was offering a bit of swing and seam but both the West Indian batsmen, Chase and Brathwaite denied the skills of their opponent to score 50 runs partnership.

But Chase then threw his wicket unnecessarily straight into the hands of the keeper, which was their only wicket of the morning session.

He played an outside off delivery off Hassan Ali that took an inside edge of his bat with Muhammad Rizwan taking a fine catch behind the stumps.

Despite the loss of a wicket, West Indies took the session towards their side because Brathwaite was looking in some mood. He did have a couple of rough shots but then he quickly recovered to get himself in a good position.

Jermaine Blackwood never settled on the crease as soon as he arrived because of all the four boundaries he got on inside edges and shortly after Lunch, he gifted his wicket.

After being unable to get the right line and length throughout the morning, Shaheen Afridi came back strongly to get rid of Blackwood and Kyle Mayers off successive deliveries right after West Indies completed their 100.

Blackwood was the first one to go after playing a lousy shot at mid-on before Mayers get trapped in an LBW, he immediately reviewed the decision but it was denied.

West Indies, just like the other day, lost two wickets quickly and the skipper came in to take the responsibility on the other end. Holder and Brathwaite played as confidently as they look.

Holder, survived some luck after he was given out in the same over but the option of review gave him another life as the ball was pitching outside –off. This was the last drama for West Indies as the remaining session went smoothly.

The 96 runs stand included Holders 11th Test half-century just short of tea but as soon as they reached Pakistan’s 217, Holder nicked Faheem Ashraf behind the stumps to give a crucial breakthrough.

Joshua da Silva took the other end but short after that Brathwaite lost his wicket in a non-existing second run as Hassan Ali directly hit the ball at the keeper’s end.

However, Pakistan failed to get used to the situation and leaked 25 runs from da Silva and Kemar Roach just before Muhammad Abbas trapped Roach in an LBW after the second new ball.

Bad light ultimately stopped the play and West Indies went slightly ahead of Pakistan by 34 runs with two wickets in hand. The hosts will be looking to add 20-30 runs on day 3.