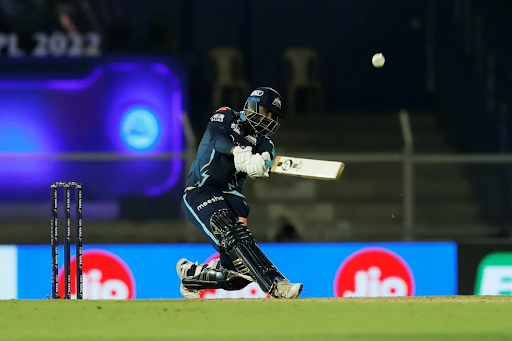 Gujarat Titans continued winning run on their maiden appearance in the Indian Premier League (IPL) 2022 as they defeated Punjab Kings (PBKS) by 6 wickets in the 16th match of the tournament played at the Brabourne Stadium in Mumbai on Friday night.

Rahul Tewatia was the hero along with Shubman Gill for the winning side Gujarat Titans as the all-rounder smacked 2 sixes off the final 2 balls of the match to hand his side a win when they needed 12 to win.

Shubman Gill continued with his rich form with the bat scoring 96 from only 59 balls with the help of 11 boundaries and just one six to consolidate for his side, which recorded its third consecutive victory in the tournament to mark an impressive start.

The victory took Gujarat Titans to the second spot in the Indian Premier League 2022 points table as they now have 6 points from 3 matches and a Net Run Rate of 0.349.

In reply to Punjab Kings’ total of 189/9 in their 20 overs, Gujarat Titans finished at 190/4 with other heavy contributors being Sai Sudarshan (35) and captain Hardik Pandya, who made a crucial 27 towards the end of the innings.

Earlier in the match, English all-rounder Liam Livingstone continued making big scores as he smashed 4 sixes and 7 boundaries to score 64 from only 27 balls as he lifted Punjab Kings with yet another superb knock. Shikhar Dhawan scored 35 from 30 balls with the help of 4 boundaries whereas wicketkeeper-batsman Jitesh Sharma made 23 from 11 balls, hitting 2 sixes and a boundary in the process.

Afghanistan spinner Rashid Khan was the pick among the bowlers for Gujarat Titans as he returned with the figures of 4-0-22-3 whereas the other debutant for the new IPL team, Darshan Nalkande took 2/37 from his three overs. Among the other wicket takers for Gujarat Titans were Mohammed Shami, Hardik Pandya and Lockie Ferguson who all took one wicket each.

Gujarat Titans made a strong start to the chase as the opening pair of Matthew Wade and Gill added 32 runs from 22 balls to set their team on the right path in their chase. The GT side was then consolidated by a 101-run stand for the second wicket between Shubman Gill and debutant Sai Sudharshan.

The left-handed Sai Sudharshan was impressive in his first outing in the IPL 2022 tournament as he scored a fluent 35 from 30 balls, hitting 4 fours and a six. Pandya hit 5 fours in his short innings of 18-ball 27 whereas David Miller remained unbeaten on 6 and the left-handed Rahul Tewatia finished at 13 not out from 3 balls with 2 huge sixes.