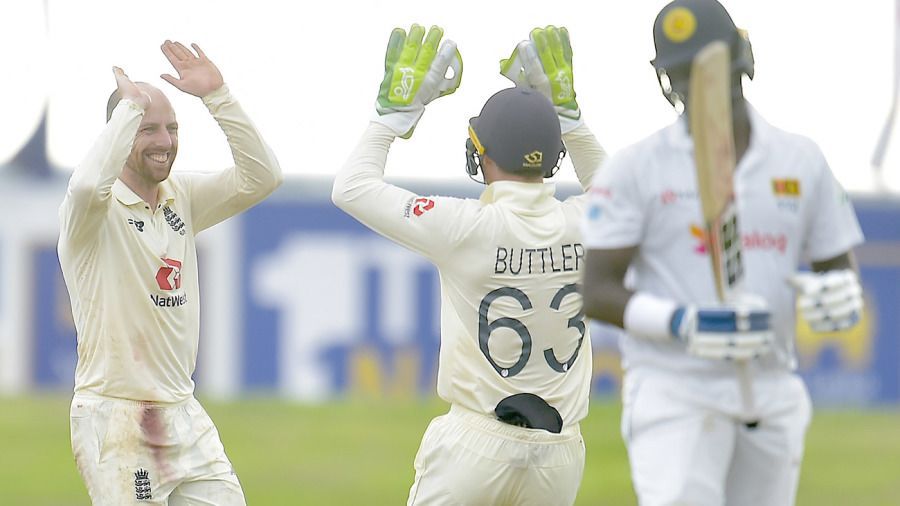 Jack Leach (left) did extremely well to take his second five-wicket haul in 12 Tests so far to help set up the game for England, who face a testing final day at Galle on Monday

England were tantalisingly placed at 38/3 chasing 74 to win in the first of the two-match cricket Test series against Sri Lanka at stumps on Day Four at Galle, with Jonny Bairstow (11*) and debutant Dan Lawrence (7*) at the crease.

England, who have dominated for the majority of the first cricket Test match, now need 36 more runs to win with seven wickets in hand as a game is set for a thrilling finish on the final day on Monday, with Sri Lankan spinners looking to cause further damage to their innings.

For the visiting side it may be a small yet tricky target to chase but it came after a splendid effort with the bat by the Sri Lankans, who were bowled out for a mere 135 on the first day of the Test and since then have been on back foot. Sri Lanka were served well by their opening batsman Lahiru Thirimanne (111) who scored his second Test century and first since 2013, while the veteran all-rounder and Angelo Mathews scored a resolute 71 from as many as 219 deliveries to keep England at bay and delay the evitable.

But England made a nervy start to their small chase as opening batsman Dom Sibley missed a straight delivery from left-arm Sri Lanka spinner Lasith Embuldeniya as he was cleaned up for two, while his opening partner Zak Crawley was caught by Kushal Mendis off the same bowler for eight. In what turned out to be an embarrassing display of running between the wickets between two senior England batsmen, captain Joe Root, who scored a splendid double century in the first innings, was run out for a mere one when Bairstow called for a tight single late on day four.

Earlier in the day, it was a splendid five-wicket haul from England left-arm spinner Jack Leach who returned with the figures of 41.5-6–122-5 while spin bowling partner Dominic Bess claiming 3/100 from his 33 overs as England managed to bowl Sri Lanka out for 359 in their second innings, with the home side putting up a strong fight after their embarrassing display with the bat on the opening day of the Test.

Sri Lanka’s strong reply with the bat came after England amassed as many as 421 in the first innings with Root scoring 228 while Lawrence making 73. Bairstow was unlucky as he was dismissed for 47 while wicketkeeper-batsman Jos Buttler made 30. Dilruwan Perera claimed 4/109 and Embuldeniya returned with figures of 45-4-175–3.