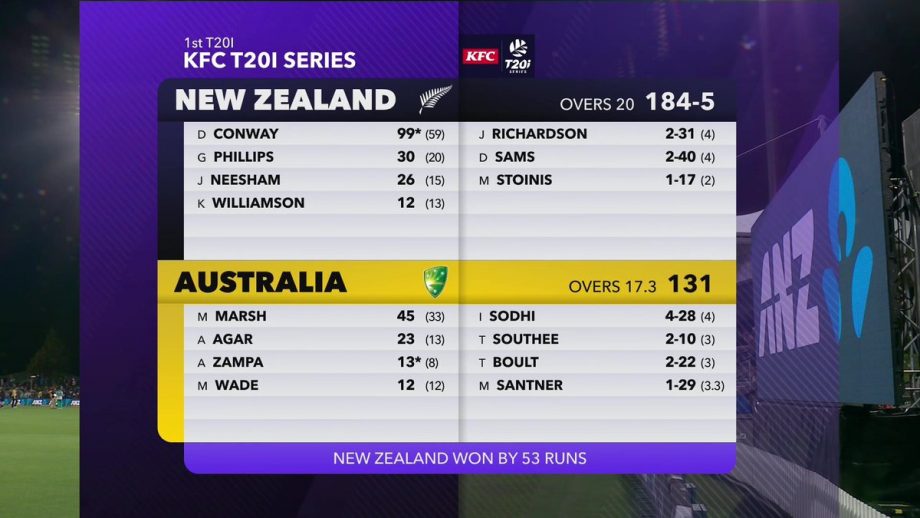 New Zealand beats Australia in the first T20 at Hagley Oval with a huge margin of 53 runs on the back of a brilliant unbeaten knock of 99 runs by Devon Conway and Ish Sodhi, who picked up 4 wickets to take his side across the line.

Devon Conway and Ish Sodhi helped New Zealand seal an easy victory over Australia in the opening match at Christchurch on Monday.

Conway smashed an unbeaten knock of 99 runs off 59 balls as the Black Caps overcame the shaky start to finish on 184-5 after losing the toss and asked to bat first.

In response, Australia was all out for 131 in 17.3 overs with the Black Caps spinner, Ish Sodhi picking up four wickets at the cost of 28 runs.

Jhye Richardson who has recently signed into a multi-million dollar IPL contract picked up two wickets for 31 runs in four overs.

But the tourists could not deny the marvellous innings from Devon Conway who played a stunner for 99* off 59 balls including 10 fours and 3 sixes before New Zealand were trembling on 19-3.

Australia managed a flop show as Tim Southee and Trent Boult tore down the experienced top order of the Aussies. Unluckily, the debutant Josh Philippe could not help himself after skying the ball for top edge into the air and being caught.

But the old in the business, Aaron Finch and Glenn Maxwell also failed to deal with the pacy inswingers from Kiwis attack, leaving Australia on 19-4.

Mitch Marsh was the top scorer with 45 and Ashton Agar scored 23 to save the embarrassment as the lack of consistency gave New Zealand a comfortable 53 runs win.

Talking about his superb knock, Conway said that he is pretty excited about that but he is also disappointed for Ish Sodhi who missed his fifer for a single wicket.

“You’ve just got to ride that wave as long as it lasts, but I am pretty happy; it’s a good start to the series and we have just got to keep the momentum going,”

he said at the post-match presentation.

“For me, the key to my batting is just playing strong shots and running hard between the wickets. I’m not looking too much into it and just enjoying the moment.

“Naturally, I am a little disappointed to miss the hundred but good to get the win. Probably a little more disappointed for Ish Sodhi not getting his five-for but happy days. It’s pretty cool.”

Moreover, Mitchell Marsh, who was the top runs scorer from Australia was equally impressed by the knock of Devon Conway and said that they need some planning to get rid of him in the upcoming matches.

“It was an incredible innings,”

“He is obviously someone we’ll have to make sure we do a lot of homework over the next few days. On days like that, you have to take your hat off and say well done. There’s no doubt all our bowling groups were well planned; he just had a great day.”

“The way they swung the ball – they probably swung it for seven or eight overs which, in T20 cricket, is pretty rare but we know they are world-class swing bowlers,”

“They have done it for the last 10 years those two. We’ll have to combat that in the next few games if it swings.”