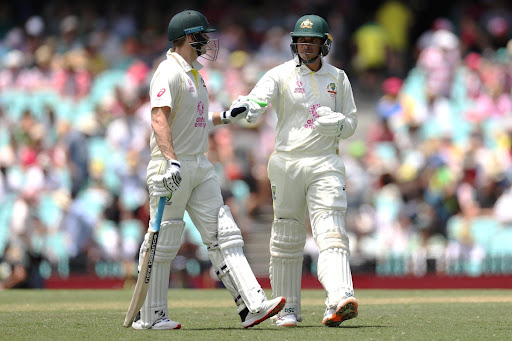 Warner, Khawaja, and Labuschagne have put the visitors in a controlling position

Warner and Khawaja made 156 runs opening partnership while Labuschagne and Smith, who traditionally bat so well in tandem, will be aiming to build on their 68 run partnership.

At the start of day 3, Warner and Khawaja made 156 runs opening partnership, where Australia’s aggression rattled an increasingly wayward Pakistan attack, Warner fell for 68 having missed a skidding delivery from off-spinner Sajid Khan which smashed his middle stump. Having started slowly, Warner showcased renowned aggressions as his innings wore on, but might rue backing away in an error of judgment.

It was a patchy performance from the Pakistani bowlers who created more opportunities than Australia’s tramper effort with the ball, as they mostly struggled to rein in the scoring. They will especially rue reprieving Khawaja on 22 when a luckless Afridi set him up perfectly with a full-pitched delivery, only for Fawad Alam to shell a straightforward chance at gully.

Pakistan lost their early momentum after Naseem and Shaheen conjured pace, bounce, and movement in a blistering start. Helped by cool and cloudy conditions, Afridi found away swing and bowled a gem of an opening over to Warner to Kick-start a dangerous spell.

Khawaja, who was on the cusp of a third test century in five innings since his comeback, was dismissed on 97 by left-arm spinner Nauman Ali after bungling a reverse sweep that hit the glove and popped to short leg.

The originally not out decision on the field was overturned after replays showed that the ball had hit high on the glove of Khawaja, who had until then played the risky stroke to good effect throughout his 159-ball innings.

Labuschagne, who has played just seven of his 24 tests away from Australia, looked in ominous form, mixing gorgeous drives with reverse-sweeps to negate the spinners. He had looked less comfortable at the start of his innings when he was pitted in an intriguing contest with quick Naseem Shah, who hit him with a thunderbolt on the arm during the withering spell in the second session.

Labuschagne and Smith, who traditionally bat so well in tandem, will be aiming to build on their blossoming 68-runs partnership with Australia still needing work to do approach Pakistan’s huge total.

Marnus Labuschagne lived up to top billing and relished the flat pitch to be unbeaten on 69 while Steve Smith also looked untroubled on 24 not out at Stump.

Australia was 271-2 at stumps day 3 in their long road back into the series opener in Rawalpindi.