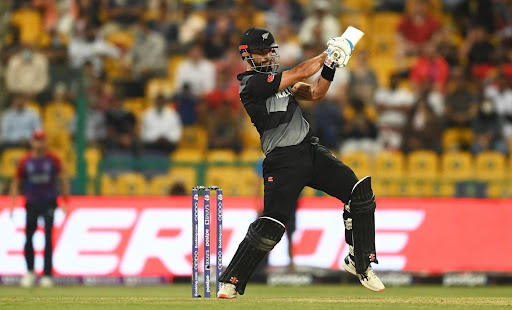 New Zealand cricket announced on Sunday that Daryl Mitchell have added to the test squad against India as a replacement player for Devon Conway who have injured during the semi-final against England.

New Zealand all-rounder Daryl Mitchell has replaced the Devon Conway in the Kiwi’s Test squad for the upcoming tour of India. Conway has been ruled out of their upcoming series against India due to a broken hand during the semi-final game against England on Wednesday. He will also not be the part of the Playing XI in the big final clash against Australia on Sunday night.

Head coach Gary Stead said Conway would return home with the T20 squad after their three-game series in India next week, while Mitchell will stay on for the two-test series starting later this month.

“It’s a shame for Devon to miss out on the first series of the new World Test Championship cycle, but it also offers up an opportunity for someone else,”

“Daryl’s versatility means he can cover a lot of batting positions and he’s certainly got plenty of confidence at the moment. He’s proven he can perform in Test cricket and I know he’s excited to rejoin the Test group,”

The all-rounder Mitchell was the man of the match in the T20 World Cup semi-final against England. He has scored 197 runs in the tournament.

New Zealand will travel to India on Monday for their next assignment and will begin the T20 series on November 17 in Jaipur. Indian regular skipper Virat Kohli has been stepped down from his role as a captain in the short format. However, Indian Opener Rohit Sharma will lead the India in the T20 series against New Zealand while KL Rahul named as vice-captain.

The two test series start in Kanpur on November 25 with the second test in Mumbai from December 3.