Chasing streak is alive as Islamabad charges over defending champions, Karachi, Asif Ali takes up from the crucial stage 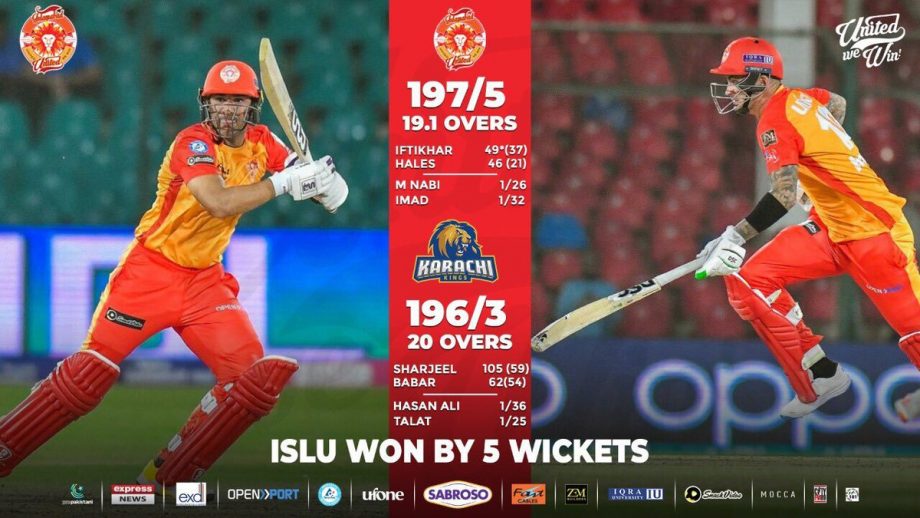 The chasing streaks continue in the sixth edition of PSL as Islamabad United charges on the defending champions, Karachi Kings on the back of a stunning effort from Asif Ali who finishes in style for Islamabad by 5 wickets on Wednesday.

Islamabad was expecting a lot from Alex Hales and the Englishman responded immediately by hitting 29 runs in the third over by Amir Yamin, the highest runs conceded in a single over ever in PSL history.

United promoted Faheem Ashraf up to number four and it proved a right decision as the left-hander combined with the right-hander, Hales, to complete a thrilling 50 runs stand in just 16 balls.

The astonishing partnership was growing harder and taking the game away from Karachi until the left-arm pacer, Waqar Maqsood ended up the power show of Hales after dismissing him on 46 just before the end of the powerplay.

Karachi’s player of the match from the recent match, Arshad Iqbal removed Faheem on 25 as he was watching the ball hit the stumps, United were reeling at 82-4.

Hussain Talat and Iftikhar Ahmed provided the stability that United was looking for. They completed the 50 runs stand in the 13th over to take United closer to the chase.

In the last 6 overs, United required 60 runs when the duo decided to accelerate the innings while Muhammad Nabi tried his best to apply the brakes.

Nabi was finally rewarded for his consistent spells after he trapped Talat in an lbw for 42 but United still needed 21 off 14 balls.

The powerhouse, Asif Ali scored the remaining 21 runs all by himself in just 9 deliveries to take United across the line with 5 wickets in hand at National Stadium Karachi on Wednesday.

Alex Hales was named as man of the match for his sensational knock of 46 off 21 balls.

“It was a really big chase and I thought we had to knock the teeth out of it early. I felt like the pitch was getting slower as the game went on so I planned to be really attacking in the Powerplay and get the run rate below 10 and fortunately that worked tonight,”

said Hales in a post-match presentation.

It was quite nice with the new ball and pace on the ball, but it was spinning quite a lot in our innings and the slower balls were holding so that makes our chase even more impressive. We’ve had two really good team wins. We had our backs against the wall a few days ago in the chase and got over the line. To chase such a big total with different guys contributing at different times is good.”

Earlier today, Islamabad won the toss and opted to ball first which did not help them a little bit as Babar Azam and Sharjeel Khan shared a record opening stand of 176 runs to take Karachi on 196-3 in the allotted overs.

Although, Sharjeel was struggling at the start of innings when he only managed 6 off 17 balls. On the other side, Babar Azam was playing his classy drives as usual following five boundaries in the power play, took Karachi to 33 for no loss.

United skipper, Shadab Khan decided to take the attack after power play but Sharjeel did not want to miss the chance as he went against him and hit a boundary in his first over.

But the real fun started in the second over of Shadab when Sharjeel went big, hit him four consecutive maximums in the 9th over of the game, taking the score to 80 without a loss.

Shadab decided to bring in Lewis Gregory, player of the match from the last game but it also did not work as Sharjeel hit the slow delivery over the third man area to complete his half-century in just 32 balls.

The message was received by Sharjeel from the dressing room as he tried to hit Zafar Gohar on every ball after the time out, successfully hitting 17 runs in the second over from Gohar.

Iftikhar Ahmed came next to distract the leftie but Babar Azam took advantage of the moment and hit the part-timer for a six to complete his half-century in 38 balls.

Mohammad Wasim finally gave a breakthrough to United on 124-0, however, the right arm pacer had overstepped from the line for a no-ball, giving Sharjeel a second life.

Karachi did not learn from the previous mistake as Hussain Talat overstepped on a wicket-taking delivery and this time it was Babar Azam who hit deep straight into the hands of the fielder.

With Karachi on 140-0 after 15 overs, both the openers needed to change their gears and Sharjeel stepped up to break the previous highest partnership record of 157 between Babar and Liam Livingstone in PSL.

The left arm was not done yet as he brought his second PSL century in just 55 balls before hitting Faheem Ashraf for a six in the 18th over. United got another breakthrough in the second last over when Babar got run out.

Sharjeel was next on the list as Hassan Ali trapped him in an lbw on the very next ball. Late 12 runs from Daniel Christian ensured the highest total from Karachi this season.

Imad Wasim is looking forward to the game and admitted a few mistakes that cost them the match. He also said that we are looking for a strong comeback as it is just the start of the league.

“In the Powerplay, we were short 20 runs the way we started. We have to sort it out. Credit to Hales and at the end Asif Ali. It wasn’t spinning and then suddenly it started spinning. I think it was dew.

I gave Nabi the 18th over because he was the best bowler tonight. I would be very annoyed if I didn’t give him four overs. You don’t lose the tournament if you lose the second game so it’s just the start of the tournament,”

said Imad in a post-match presentation.