Babar, Rizwan stars at the National Stadium Karachi to clean-sweep WI in the T20I series 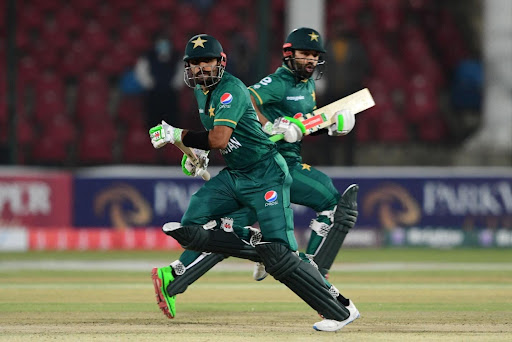 West Indies could not get a single victory against the hosts in the T20I series after Pakistan’s opening pair Babar Azam and Muhammad Rizwan steered the chase – getting the victory for Pakistan by 7 wickets in the final T20I at the National Stadium Karachi.

West Indies failed to open their account against the hosts in the T20I series after Pakistan’s opening pair Babar Azam and Muhammad Rizwan steered the chase – getting the victory for Pakistan by 7 wickets in the final T20I at the National Stadium Karachi.

West Indies gave a giant 208 runs target after the skipper Nicholas Pooran decided to bat first in the third T20I on Thursday (December 16).

The best duo in the business scored more than 50 runs each, leaving the West Indian bowling unit clueless. The skipper scored 79 runs off 53 balls followed by nine 4s and two 6s, while Mohammad Rizwan made 87 runs off 45 balls and smashed 10 boundaries and three maximums.

West Indian bowlers finally made a breakthrough when Odean Smith scalped the wicket of Babar Azam in the 16th over. Rizwan was next to go in the 18th over by Dominic Drakes but the damage was already done.

Pakistan faced another dismissal in the 18th over in Fakhar Zaman but Asif Ali (21) with his giant hitting led his side home by 7 wickets and 7 balls to spare.

Earlier, the decision to bat first proved beneficial for West Indies openers Brandon King and Shamarh Brooks gave a brilliant start to their side.

Both the batters managed to score 92 runs on the board, as King hit 43 runs — on the back of four boundaries and two maximums — off 21 balls and Brooks made 49 runs — followed by two fours and four sixes — off 31 balls before they were sent back to the Pavillion.

After the dismissal of the openers, Pooran came to bat next and managed to pull off an impressive knock after hitting 64 runs off 37 balls, with two four and six sixes.

Darren Bravo also kept the scoreboard moving as he added 34 crucial runs to the Windies’ total.

The Pakistani bowlers failed to impress today as they leaked too many runs, with Mohammad Wasim taking two wickets and Shahnawaz Dahani picking up one scalp — his first international wicket at home.

“We planned that we had to play according to the situation. Rizwan and I thought of going till the end and keeping managing the run rate. The way the bowlers put an effort – Wasim, Shaheen, Haris, Dahani, Hasnain – overall it was a team effort. Our bench strength got a good workout too. A great sign for me as a captain. We all know runs keep going more in T20I cricket, and the way we are scoring is the best thing for us. The way Rizwan has played through 2021, the way he has improved his batting, the way he has made us win games… I think there’s a lot for youngsters to learn from there.”

Mohammad Rizwan, Player of the Match:

“Chasing 200+ is a big target, but we thought that the way they batted with aggression, we had to do the same too. Our coach told us that we need to clear the circle. Thanking Allah for the 2000+ runs this year. I go match by match when I play. I have worked on my pull because you need to pick the length. I am now trying to improve on the offside.

“I felt that the last two overs, we definitely lost momentum. Pakistan bowled well in the back end. We were 20 runs short on this wicket. Very tough to prepare for the virus. Most of the guys did not sleep last night, so I am very proud of the way they have played. We went from strength to strength every game. It’s a special team, a special bunch of guys. We competed throughout the series.”