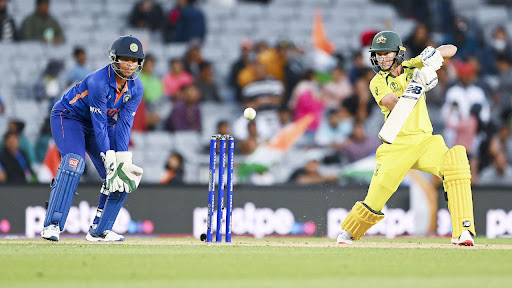 Australia beat India by 6 wickets in the final over to set the record for the highest successful run-chase in the history of the tournament.

Australia beat India by 6 wickets in the league stage fixture in the final over in Auckland on Saturday to set the record for the highest successful run-chase in the history of the tournament.

Alyssa Healy and Meg Lanning played an incredible match-winning knock to ensure that Australia break the record for the highest successful run-chase in Women’s World Cup history, overcoming the one they set against Sri Lanka in the 2017 edition of the tournament.

Chasing a target of 278 runs set by India, Meg Lanning smashed 97 off 107 balls and Alyssa Healy slammed 72 off 65 deliveries to take their side home in a thrilling encounter.

Meanwhile, Rachael Haynes also registered 43 runs off 53 balls with Australia reaching 280 runs with the loss of four, and three deliveries to spare.

Pooja Vastrakar was in decent form for India’s bowling department, as she picked up two wickets. Meanwhile, Meghna Singh and Sneh Rana picked up a single wicket each.

Earlier, batting first in the match, half-centuries from Mithali Raj, Yastika Bhatia, and Harmanpreet Kaur helped India post a decent target of 277 for seven in 50 overs, which was more than enough on the surface.

Mithali added a crucial 68 runs to the scoreboard off 96 balls and Bhatia registered 59 off 83 deliveries. Meanwhile, Harmanpreet Kaur played a quick-fire unbeaten knock of 57 runs off 47 balls.

Both sides made one change to their playing XI with Shafali Verma slotted at the top of the order as a replacement for Deepti Sharma. Darcie Brown replaced Annabel Sutherland for the Aussies.

With the defeat, India is now in the fourth position of the points table with two wins and three losses from five matches. Meanwhile, Australia is on top of the standings, becoming the first team to claim their spot in the semi-finals.

Meg Lanning, skipper and player of the match (Aus-W):

They have got a world-class team with some real match-winners, halfway it was just about par. We felt really comfortable with that for it was a ripper of a wicket. To have come away with a win against an excellent team is really great for the group. Something we can improve on, in the field as well we were a little bit fumbly which put us under pressure…A couple of boundaries would break the back of it. Moons [Mooney] came in and took the pressure off me; I got a couple of boundaries. Healy and Haynes got us off to a great start gave us the platform and we finished it off. Was nice to see Healy do well, you could tell from the first ball she faced today, she was on with the steely look on her face.

When you lose you always feel that you are 10-15 runs short. Maybe the way the Australians started, they were ahead and the fielders did not back the bowlers when it was needed. It was one of those days when the bowling unit didn’t do well but they have been for the last four-five games…We got ourselves in that position but the next two games are a must-win for us. Thank all the people, the Indians who have come and supported us today. The experience she gets us over the years. An incredible achievement for a fast bowler to play over 200 games. It takes a lot of discipline; she is definitely a role model for many young girls back in India.