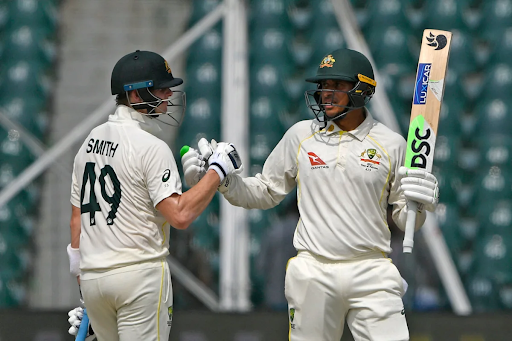 Australia were placed at 232/5 at stumps on the first day of the third and final Test being played against Pakistan at the Gaddafi Stadium in Lahore on Monday, with opening batsman Usman Khawaja and middle-order batsman Steve Smith scoring vital half-centuries for the visiting side after they won the toss and elected to bat.

Khawaja was unfortunate to have missed out on a chance to make his second century of the tour when he fell for 91, for which he faced 219 balls and hit nine boundaries and a six in the process. On the other hand, Smith was dismissed for 59 from 169 balls with the help of six boundaries as the two batsmen consolidated for Australia after the lost early wickets on the first day.

The left-arm Pakistan strike bowler Shaheen Shah Afridi produced a magical over at the start of day to remove David Warner and Marnus Labuschagne to reduce Australia to 8/2 at one stage. But a strong 138-run partnership for the third wicket between Khawaja and Smith revived Australia from a dangerous position, taking them to a position of strength at 146/2 around the tea break.

However, Pakistan fought back with three wickets in the final session with Naseem Shah being the star of the show. The right-arm Pakistan fast bowler beat Smith with his pace as the batsman’s across movement at the crease had him trapped in front of the stumps. The Australian run machine was dismissed soon after he crossed the 50-run mark once again as there have been plenty of scores between 50 and 100 for one of the world’s best batsmen.

Khawaja was dismissed nine runs short of what would have been his fourth century since he returned to the Australian side in the Ashes series late last year, with the left-handed opening batsmen being caught at first slip by Pakistan captain Babar Azam off spinner Sajid Khan.

Khawaja revealed that he battled ill health on Monday in the heat but was glad to have contributed with a big score.

Australia batsman Travis Head could not trouble the scorers much as he fell after making 26 from 17 balls, having hit four boundaries in the process. Naseem Shah had then got behind by Pakistan wicket-keeper Mohammad Rizwan.

For the remaining time in the day’s play, Australia wicket-keeper batsman Alex Carey and all-rounder Cameron Green did well to keep Pakistan at bay, taking their team’s total to 232/5 at stumps. Green was batting on 20 not out for which he has so far faced 48 balls and hit two boundaries whereas Carey was on 8 not out from 15 balls with one four already.