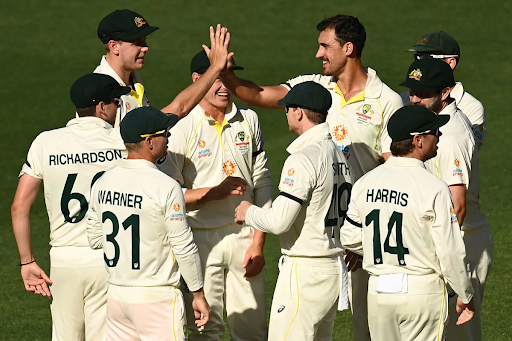 Australia extended their overall lead to 282 runs in the second Test match of the Ashes 2021-22 series being played at the Adelaide Oval on the third day on Saturday, reaching 45/1 in their second innings after bowling England out for only 236 earlier in the day.

Australia had posted a huge total of 473/9 declared in their first innings and were able to obtain a huge lead of 237 runs with Mitchell Starc and Nathan Lyon sharing 7 wickets between them.

England had done really well in the first session of play on the third day when their captain Joe Root and No 3 batsman Dawid Malan combined once again to add 138 runs for the third wicket, batting out an entire session and keeping Australia at bay. But Australia all-rounder Cameron Green got rid of England captain Joe Root for 62, for which he faced 116 balls and hit seven boundaries.

Malan top scored for England with 80 from 157 balls with the help of 10 boundaries before he was dismissed by Starc, after which England team failed to produce any sort of resistance against Australian bowlers. Ben Stokes hung around for long, making 34 from 98 balls with three boundaries and a six whereas Chris Woakes made 24 from 40 balls with five boundaries, but their efforts were not enough to take England past the follow-on mark.

For Australia, who were without Pat Cummins and Josh Hazlewood in this match, Starc returned with impressive figures of 16.1-6-37–4 whereas Lyon took 28-11-58-3. All-rounder Green was impressive as well, claiming 10-3-24-2 whereas Neser took 1/33 from his 11 overs. Jhye Richardson remained wicketless for Australia as he gave away 78 runs from 19 overs at an economy of more than four  runs an over.

Australia had the option of asking England to bat again but the stand-in captain Steve Smith decided that the hosts would but again. David Warner and Marcus Harris began brightly for Australia in the second innings, adding 41 runs in about 14 overs before their partnership came to an abrupt end. A horrible mixup between the two left-handers resulted in Warner being run out for 13 from 38 balls, as Australia sent out Michael Neser as the night watchman.

Harris looked promising in the ending stages on the third day, hitting three boundaries to make 21 from 59 balls as he was unbeaten at stumps. Neser was batting on 2 as Australia’s lead surged to 282 runs overall.