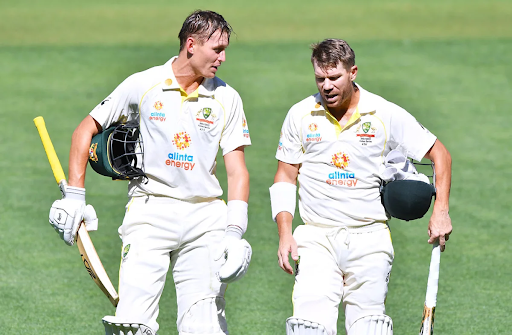 Australia took control of the second Test match of the Ashes 2021-22 series being played at the Adelaide Oval against England, finishing at a strong position of 221/2 at stumps of the first day-night Test of the series on Thursday.

David Warner was unfortunate to have missed out on a deserving century for the second time in the series, while Marnus Labuschagne made 95 not out to put Australia in a commanding position after the home team suffered early jolts and decided to bat first.

The hosts were without their regular captain Pat Cummins who was ruled out of the second Test for being deemed as a close contact of a coronavirus positive person at a restaurant in Adelaide on Wednesday night. Cummins was dining with his brother and Australia domestic cricketer Harry Conway when he found out that a person sitting on the next table was coronavirus positive. Cummins alerted the authorities but later on was ruled out of the second Test since he has to be isolated for seven days as per the local government’s instructions. The fast bowler also returned a negative test later on in the day.

Steve Smith thus became Australia’s stand-in captain for this second Test in which the home team made giant strides on the first day itself. After losing opening batsmen Marcus Harris for cheap early on to the England fast bowler Stuart Broad, who completed his 150th Test match, the pair of Warner and Labuschagne put England bowlers to a stern Test in which they failed miserably.

Warner and Labuschagne got together when Australia were struggling at 4/1 early on in the contest. The to not only kept England bowlers at bay with restraint batting, laced with tremendous control and discipline, they added 172 runs for the second wicket to put the home team in command.

Both Warner and Labuschagne produced some of their slowest innings in Test cricket on Wednesday. While Warner fell to Ben Stokes for 95 from 167 balls with the help of 11 boundaries, Labuschagne was unbeaten on 95 having faced 275 balls, including 7 fours at stumps.

Smith had done well to reach 18 not out from 71 balls with a couple of boundaries to get a start after failing with the bat in the first innings of the first Test at Brisbane, which Australia won by a huge margin of 9 wickets.

England called back both their experienced fast bowlers Broad and James Anderson for this Test, but neither of them could have any impact as such. In the absence of Mark Wood, Stokes was forced to bowl a barrage of short deliveries, which the Australians handled extremely well, particularly Labuschagne.

England captain Joe Root is acting as the specialist spinner in this Test in which the visitors will have to do a lot of work in order to level the series with Australia, who are missing two of their primary fast bowlers Cummins and Josh Hazlewood. The experienced fast bowler Michael Neser is playing this Test in place of Cummins.