Australia claim control of 3rd Test vs Pakistan at Lahore   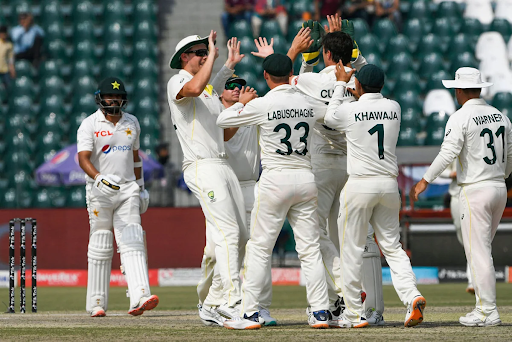 Australia produced an incredible fightback late on the third day of the third and final Test being played against Pakistan at the Gaddafi stadium in Lahore on Wednesday, sparking a batting collapse in the home team’s ranks to take a huge lead of 123 runs in the first innings with two days left for the series to be decided.

Australia captain Pat Cummins claimed a superb 5-wicket haul whereas left-arm fast bowler Mitchell Starc took 4 wickets as the two Australian fast bowlers shot out Pakistan from a position of command at 214/2 to 268 all-out, giving their side a huge advantage in the third and final Test.

At stumps, Australia were ahead by 134 runs in total with the second innings score of 11/0, with their opening batsman David Warner batting on 4 in the company of Usman Khawaja, who was unbeaten on 7. Both Warner and Khawaja opened up their accounts with boundaries in the second innings.

Starc said Australia had in a way found a blueprint to success in Asian conditions which requires them to be patient for longer durations and stick to their plans.

“To be able to control the scoreboard fairly regularly … and then capitalise on little moments like we did tonight with getting a breakthrough and then putting the foot down, I think that’s a great sign for this group.

“Obviously we’ve got a couple (of subcontinent tours) to go after this tour so it’s a nice blueprint to start with, whether we tweak that for different conditions and different countries. We’ve got two days now, we’ve got an opportunity with how we’ve gone today and batting first to press through and hopefully translate that into a win this week, and then I guess a blueprint to take forward with us,”

It was Pakistan all the way for the majority of the third day with their opening batsman Abdullah Shafique and Azhar Ali keeping Australia bowlers under pressure. Shafique and Ali added 150 runs for the second wicket to put Pakistan in control, but once their partnership was broken, the home team struggled to find put up resistance against the Australian bowlers.

Nathan Lyon struck to dismiss Shafique for 81, for which the right-handed opening batsman faced 228 balls and cracked 11 boundaries. On the other hand, Cummins took a brilliant return catch to get rid of Ali, who was looking set for a century at his home ground. Ali was dismissed for 78 from 208 balls, which included seven boundaries and a six.

Pakistan captain Babar Azam (67) battled hard till the end but he kept running out of partners once Starc bowled a brilliant delivery to get rid of Fawad Alam for 13, hitting the top of the of the off-stump after getting the ball to move in. Pakistan wicket-keeper batsman Mohammad Rizwan had a similar fate when Starc came around the stumps to beat his defence and leave the home side reeling.

In the final hour of play, panic button was pressed in the Pakistani dressing room as none of the following batsmen after Alam could reach double figures. In fact, the last four wickets fell without adding any runs whereas the home team lost 8/54 overall.