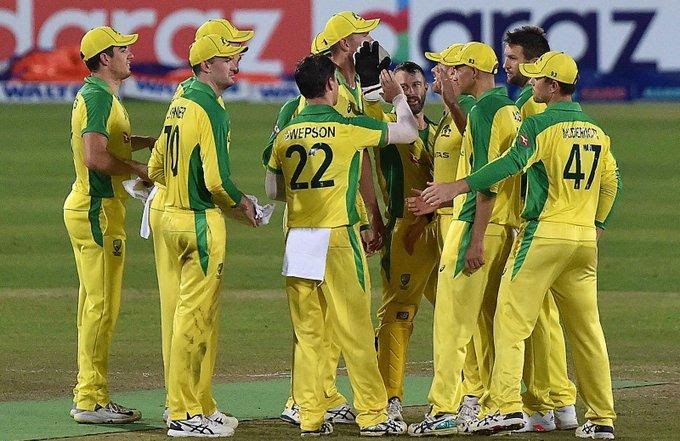 Australia after being outclassed by Bangladesh in a five-match T20I series by 3-0 in their backyard, finally won the fourth T20I by 3 wickets to save some pride at Sher e bangle stadium on Saturday.

Andrew Tye and Mitchell Swepson from Australia combined some brilliance in their bowling spells to defeat the visitors by 3 wickets at Sher e Bangla stadium on Saturday to record their first-ever victory in the five-match T20I series after facing an embarrassing 3-0 defeat in the series.

After a close contest on Friday which Bangladesh won by 10 runs, Australia made sure of their existence in the second last T20I. The final match of the series will be played at the same venue on Monday.

Tye (3-18) and Swepson (3-12) restricted Bangladesh to 104-9 in the allotted overs as the hosts lost three players, including skipper Mohammad Mahmudullah to a duck, with an opener Mohammad Naim leading the score with 28 runs.

Bangladesh bowlers tried their every best to defend this undefendable total and they went too close in their cause but a timely 15 balls 39 by Dan Christian did the job already alongside a run a ball 27 contribution from Ashton Agar helped the visitors sealed their first every victory with an over to spare.

“We’ve worked hard over the last few games and not had the result go our way. It’s hard work out there. The way Dan played, that’s the difference between moving and losing sometimes. We needed big runs up top, and that changed the match…But we’ll get one more opportunity to put a score out there next game, both personally and as a team. The bowlers have obviously dominated in this series. You’re looking to get quick 30s and quick 40s. We may play three spinners next game,”

“It was definitely nice to get the nod to play. Nice conditions to bowl. Have never experienced such conditions back, and enjoyed. Hope to get another chance next game. On such turning wickets, I actually had a hard time keeping the ball straight,”

“It was always difficult to chase, but we didn’t assess the wicket well enough batting first. It was a 120-target wicket…We know Shakib is a champion bowler. We wanted to keep Mustafizur a bit late for the 19th over. But the bowlers did well, it’s the batters who didn’t,”