Alex Carey’s stunning 100 put Strikers in a comfortable win over Heats, with the margin of 82 runs 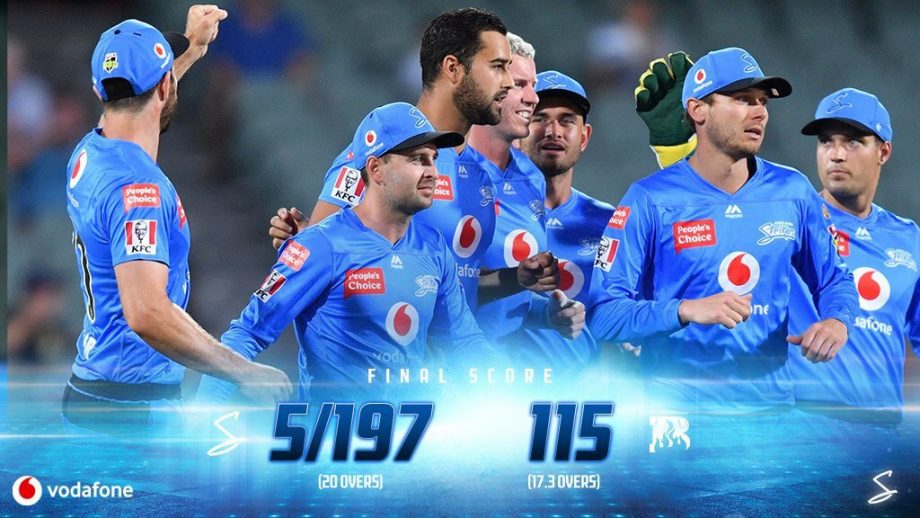 Strikers opener, Alex Carey scored a blistering century against Heat to take his side close to the finals of the season. Strikers won the game with a huge margin of 82 runs at Adelaide Oval.

In a crucial match of Strikers against Heat, Alex Carey scored a thrilling 100 to help his side get close to the entry of the final round as they marched with the massive lead of 82 runs.

Alex Carey handed the captaincy to Travis Head who just returned to the side with Carey striking at all areas of Adelaide Oval. His knock of 101 off just 62 balls included 10 fours and three sixes.

Carey went a long way through the first innings and in the journey, he was joined by the following top-order batsmen Jake Weatherald (36), Travis Head (25) and Phil Salt (26).

“It’s very nice words from a very good cricketer himself,”

Carey said of Hussey’s praise after the game.

“We knew it was a pretty big game for us tonight… it was great to put some runs on the board and help our team get to a really good score.”

Brisbane Heat had a real chance to avoid what happened on Thursday night as Marnus Labuschagne dropped a simple caught and ball chance on 26.

It was a tough three-ball contest as the previous two balls were hit out of the park by Carey for a six. The 29-year talented batsman was finally given out off the shoulder on the second last ball of first innings.

In response to the chase, Heat started quite strong after Chris Lynn lost his wicket in the third over off the bowling of Wes Agar, caught by Ryan Gibson.

Darren Lehmann’s side lost the rhythm after the departure of Lynn and they never really were on a track for the humongous run chase.

X-Factor player Max Bryant played some fine shots in the middle overs for his 25 but the damage had already been done.

Strikers pacer, Wes Agar put on a watchful show as he picked up four significant wickets for 27 runs in his four-over while Peter Siddle picked up two wickets inside the power surge.

Strikers claimed the victory in a style after Michael Neser clunked one of the best catches in BBL.