A massive heart-break for Ireland as the Blackcaps takes the ODI series by 3-0: Player Ratings from the hosts’ defeat against New Zealand  

A series of heartbreaks for the Green side

The Irish Wolves ended up on the losing side on all three occasions of the 50-over series against New Zealand. The Blackcaps remained undisputed throughout the ODI campaign in a nail-biting saga. Hence let’s take a look at the player ratings and detailed performances report of Team Ireland from this series.

Paul Stirling (7/10): Stirling is always recognised as a key target man by opponents while analysing the Irish batting unit as he turns out to be a bigger threat whenever he survives the early overs. He got out on lowlyl scores of 5 and 0 in the first two innings while struggling to read the Kiwi pacers in his home conditions. The veteran finally exploded in the final ODI by scoring incredible 120-run innings in just 103 and put up a great attempt to chase the 361 runs target.

Andrew Balbirnie (2/10): The Irish skipper who has a reputation of being Mr Consistent in Irish cricket has failed a big time in this series. He couldn’t even cross the double-digit mark even once in the three appearances and also could contribute only eleven runs in this series. The Irish fans experienced a major letdown as their captain had a disastrous individual campaign while also couldn’t save themselves from the whitewash. 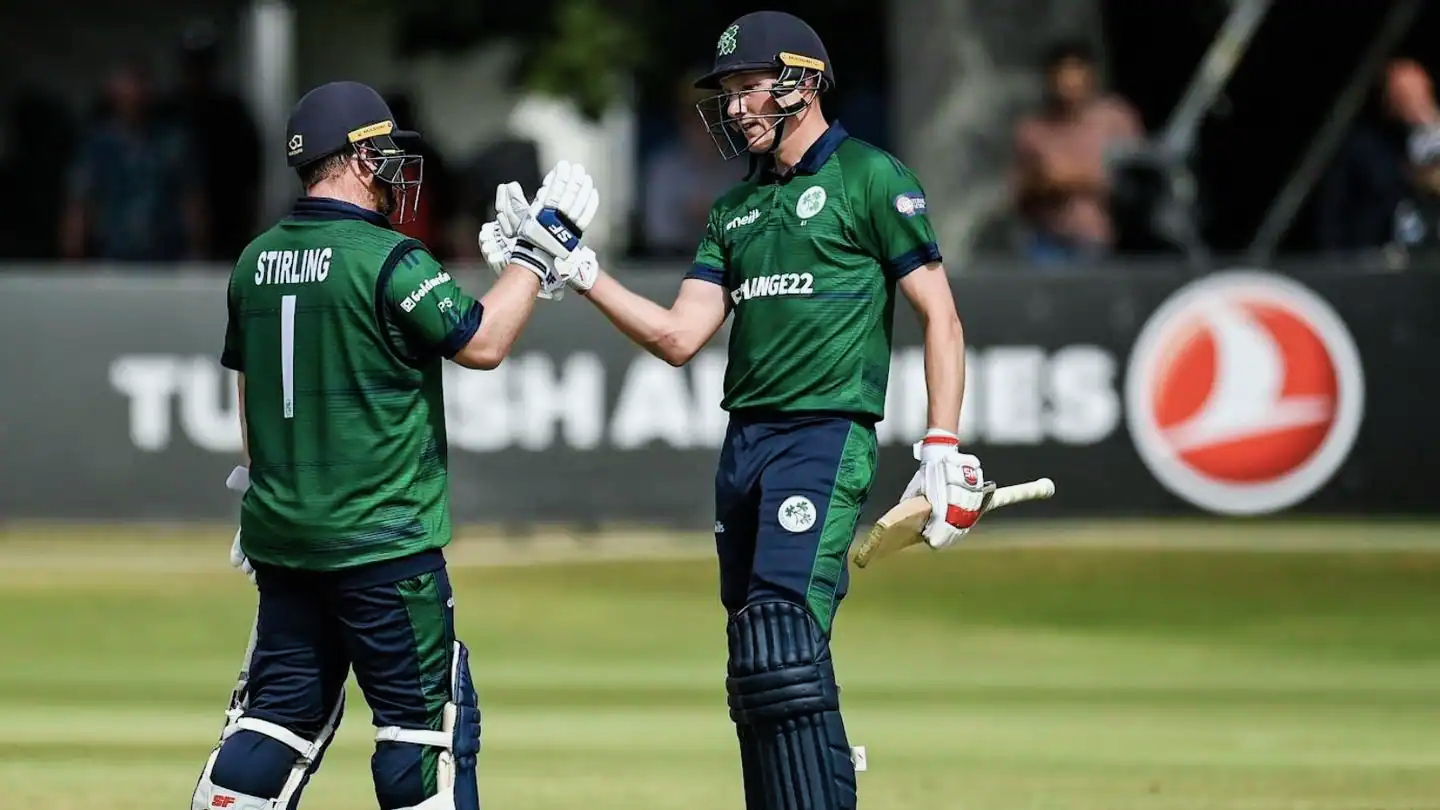 Harry Tector’s willow is on fire!

Harry Tector (9/10): The 22-year-old batting sensation is on an immense rise ever since breaking into International cricket against the neighbourhood rivals England in 2020. Tector kick-started the ODI campaign by scoring his maiden International century and also consummated the series with a hundred-run stand. The only time he couldn’t make it big was the second game where he got out early on the individual score of 4 as the Irish side also got rumbled on 216.

The youngster topped the scoring charts of the series with 225 runs with an average of 75 under his helm and that too in the presence of many big fishes who participated in the series. Tector has now scored two centuries and nine fifties in his last 16 limited-overs international appearances and it seems like there’s no stopping for the Dublin sensation.

Lorcan Tucker (5/10): Tucker came into this series with a reputation of being an explosive hard-hitter who is a master in late fireworks but went on to be completely off the mark in this series. The 25-year-old wicket-keeper got fine starts in each and every innings where he went on to a double-digit mark easily but proceeded to throw his wicket afterwards. It could have been a career-defining campaign for him if he was able to convert them into big ones against an elite opposition like New Zealand but unfortunately, Tucker dropped a sitter.

Andy McBrine (7/10): McBrine had a great outing from the opening fixture at The Village where he contributed 39 runs having a 60-run partnership for the third wicket with Harry Tector and also went on to pick the wicket of Glenn Philipps through LBW dismissal.

He then went to add 28 runs to his tally from the second ODI and also registered economical figures of 0/46 with the ball. In the final fixture, the Irish all-rounder got a quick start of 26 off 20 balls but couldn’t prolong his stay on the pitch further.

Simi Singh (6/10): The Indian-origin bowling all-rounder delivered a quickfire 30-run stand with a strike rate of 157.89 and got out on the last ball of the innings. Simi then turned up big for the second ODI with the ball and picked two wickets including an LBW dismissal of opposition captain Tom Latham when he had just crossed the fifty-run mark. Simi was replaced by leg-spinner Gareth Delany for the third game but interestingly, his way of getting out in both innings was the same through run-out.

Curtis Campher (7/10): The young bowling all-rounder may not have a fine campaign with the bat but his contribution to the team through bowling was utterly significant. He emerged as the highest wicket-taker of the series for the Green camp with five wickets and almost all his victims were the set batters. Campher picked at least a wicket in each game of the ODI series while also fetching 73 runs and two run-out contributions.

George Dockrell (6/10): To the shock of Irish fans, the star all-rounder didn’t even bowl a single over throughout the series. Although his batting form remained pivotal as he scored 114 runs from three appearances while batting down the order. Especially his 74-run knock from 61 balls where he was the highest-scorer of Irish innings striking 10 fours and 2 sixes.

Gareth Delany (5/10): The spin-bowling all-rounder was given the nod in the dead-rubber fixture ahead of the first-choice option Simi Singh. Martin Guptill was heading towards the big individual total after scoring his century but gave up in front of Delany through an LBW dismissal. Delany left a positive impression through that wicket, assuring the Ireland management that he can form a deadly partnership with Simi Singh in favouring conditions. 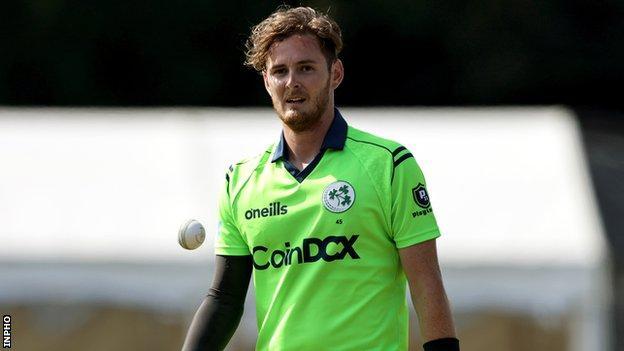 Mark Adair is on the rise!

Mark Adair (8/10): The Northern Irish speedster has emerged as a strike bowler of the Green Army and seems to be well-prepared for the elite oppositions. Adair participated in the first two fixtures and went on to pick two wickets in each of them finishing as the second-highest wicket-taker with an astonishing average of 18 for Ireland. In the second ODI, Adair opened the bowling for the Green camp in the second innings and struck the stumps of Kiwi batters in the first two balls of the innings.

Craig Young (6/10): Young may have got the wicket of Will Young in the opening ODI but his economy rate of 7.9 and was also at the receiving end when Michael Bracewell hit 24 from the five deliveries of the last over.

He made a solid comeback in the following fixture conceding only 37 runs from bowled seven overs and also got one breakthrough. The phenomenon pacer then went on to put a full stop on Henry Nicholls’ explosive innings in the third ODI and also broke the deadlock of runs in the series after two consecutive ducks in the first two appearances.

Joshua Little (4/10): The Young Dublin pacer was the one who got featured in all three fixtures for Ireland but couldn’t make enough difference. After getting a solitary breakthrough in the first ODI, Little remained wicketless in the following fixture and also could bowl only four overs. He then took two wickets in the final game but his inflated economy rate of 8.4 cost the Irish side huge as they concluded it with a humongous total of 360. Graham Hume (4/10): The South African-born pacer was handed over the debut International cap of Ireland in the final ODI. The right-arm pacer who left the South African domestic circuit in 2019 to join the Irish setup finally got his first break into Ireland’s first team after a series of impressive domestic performances. Although he couldn’t make an effective impression in his maiden International appearance and remained wicketless.