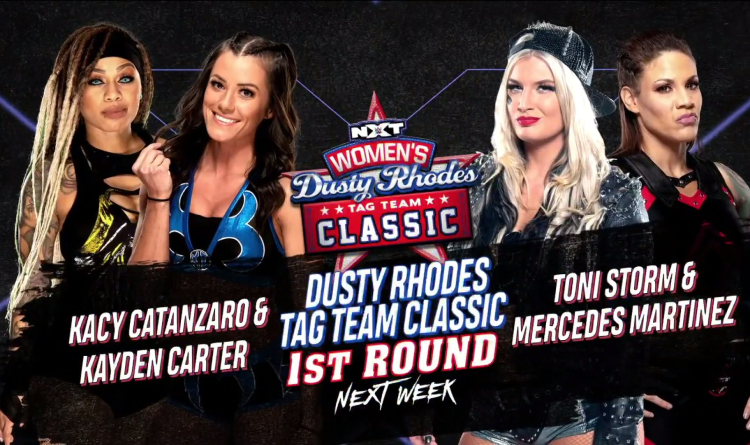 WWE NXT proclaimed the names of 8 wrestlers, who will compete at the inaugural Women’s Dusty Rhodes Tag Team Classic.

Ladies are set to fight for the Dusty Rhodes Cup

According to WWE NXT, Kacy Catanzaro and Kayden Carter will face Toni Storm and Mercedes Martinez in the first round of the event. Teams Shotzi Blackheart & Ember Moon and Candice LeRae & Indi Hartwell are supposed to take part in the competition as well; however, WWE NXT has yet to announce the names of their opponents.

Women’s Dusty Rhodes Tag Team Classic will commence on January 20. Nevertheless, the full fight card is still unknown. WWE NXT is expected to reveal the names of the rest 4 teams to participate in the contest. The tournament will most likely consist of 4 stages: first round, quarterfinals, semifinals and final. The winner of the competition will get the Dusty Rhodes Cup.

At the moment, LeRae’s team The Way has the greatest chance to be victorious at Dusty Rhodes. Candice is the only female athlete to win the PWG World Tag Team Championship. Hartwell has not earned any titles yet, but her tandem with LeRae has shown great promise. In November 2020, they beat Team Shotzi at NXT TakeOver: WarGames and cemented their status as one of the best women’s squads.

Catanzaro and Carter are sizable underdogs in a bout against Storm and Martinez. Kacy has no regalia in professional wrestling, while Kayden is a former Crash Women’s champion. Toni and Mercedes, on the other hand, have won multiple titles in different promotions. Moreover, Martinez was inducted into the WXW Hall of Fame in 2014.