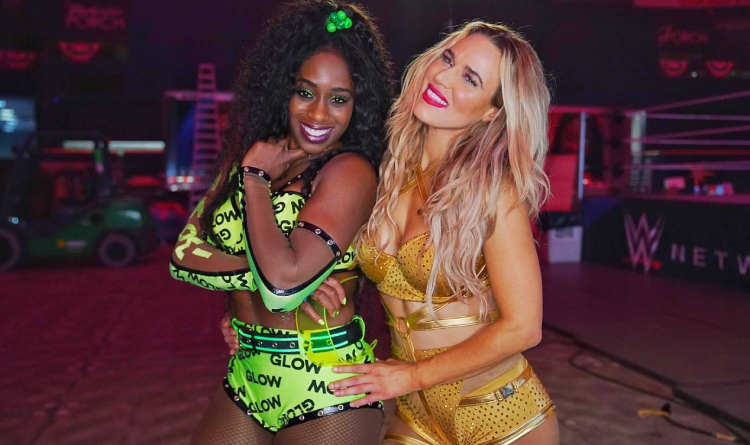 Lana and Naomi after the victory at WWE Raw

Lana and Naomi beat their opponents in a triple threat match at WWE Raw on February 1 and became the main title contenders.

A triple threat match featured 3 teams: Charlotte Flair & Asuka, Lana & Naomi, Mandy Rose & Dana Brooke. At the beginning of the contest, Flair took Naomi down. Then, Rose and Asuka tagged in and dropped each other on the mat. Lana and Brooke were the third pair to join the battle. Dana landed a handspring back elbow at Lana, and Mandy pinned her down.

After the commercial break, Flair took Brooke down and initiated a fierce brawl with Rose. However, Charlotte tagged in and double clotheslined Mandy and Dana. While Asuka brought Rose to the canvas and threw a breath-taking combination of a German Suplex, a shining wizard and a missile dropkick. Nevertheless, Lana and Naomi took the initiative. Lana kicked Flair out of the ring; Naomi took Rose out and stopped Asuka with a Rear View, winning the clash.

As a result of the victory in a triple threat match, Lana and Naomi have got an opportunity to fight against Nia Jax and Shayna Baszler for the WWE Women’s Tag Team title. Jax and Baszler earned the gold for the second time at Royal Rumble on January 31. They defeated Charlotte Flair and Asuka, who had been reigning for 42 days. WWE has yet to announce the date of Nia and Shayna title defence against Lana and Naomi.