Medvedev gets right back on the horse, Federer sets records without even playing, Rublev in GQ Russia magazine 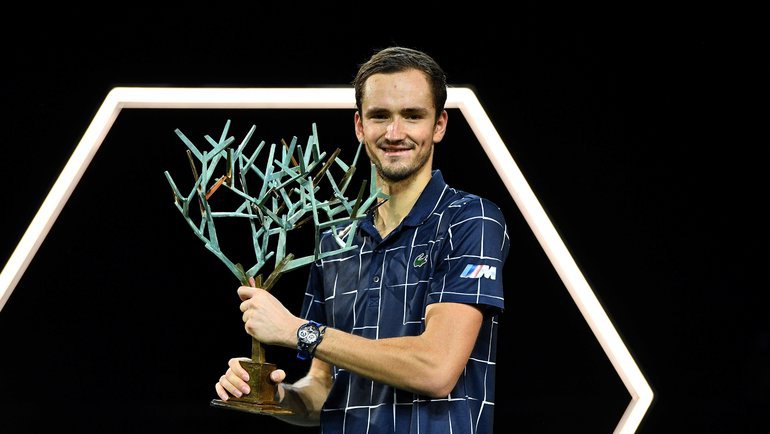 Last week there was only one Masters in Paris, but it also gave tennis fans a lot of unforgettable emotions. Below are the main events of the past week.

It has been a long time since we have seen Daniel in such fantastic form and with such a spirit for victory. He knocked Schwarzman and Milos Raonic out of the fight without problems, and in the decisive match in three sets he broke the resistance of Zverev.

It can be seen that, despite some instability after the resumption of the season, Medvedev caught the rhythm and found his game what you need before the London ATP Final, which kicks off in a week.

Recall that for Daniel this is the first title of the season, the third – at the “Masters” and the eighth – in his career.

Failure of the week

But the Greek Stefanos Tsitsipas will never find his game. He did not manage to go through even one round in Paris; he lost his starting match to the 34th racket of the world, the Frenchman Hugo Umber. Let’s hope Stefanos can recover in time for the ATP Finals and get his game back to defend the title in London.

The revelation of the week

Australian tennis player Nick Kyrgios admitted to suffering from depression on Tour. He said that he stopped trusting people and lost the pleasure of playing because he could not meet his expectations and those of others.

Match of the week

Of course, this is the final of “Masters” in Paris between Daniil Medvedev and Alexander Zverev. Both athletes approached him in excellent shape, both were charged to win, but there can only be one champion. in a three-set confrontation, the Russian snatched the title from his opponent.

Number of the week

1000. Rafael Nadal won his thousandth match in the ATP Tour.

“The only drawback is to win 1000 matches – the need to be old. To achieve this result, you need a very long career,”

the athlete joked about this

According to the Romir research holding, Maria entered the Top 10 famous personalities who are most trusted by Russians.

Federer of the week

Swiss Roger Federer continues to set records, despite not performing in Tours after knee surgery. He spent 1,000 weeks in the ATP Top 20. He entered there in April 2002 and never left this part of the world classification.

Frames of the week

Quote of the week

“I travel a lot, and they constantly ask me:” What place do you consider your home? “⁣

“For me, this is not one specific place; it is a state of mind. ⁣ At home – where thoughts rest, where the brain cannot stand, where they love not for victories and money, but accept you as you are. And they also rejoice just like that, for little things,”

– Elina Svitolina voiced the thoughts of most tennis players