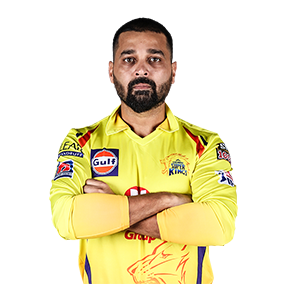 Murali Vijay is an Indian cricketer who represents the country at the international level. He is a right-handed batsman and occasionally bowls right-arm off-break. He made his debut by representing Tamil Nadu in Ranji Trophy in 2006. Murali was the highest run-scorer in the debut season, with 628 runs after Robin Uthappa and Manoj Tiwary.

In the following Ranji Trophy, he scored 582 runs, which showed his consistency at scoring runs, and was called to the Indian team to play against Australia during the 2008-09 season. In the second season of the Indian Premier League, Murali was picked by Chennai Super Kings. In the 2014 auction, Delhi Daredevils bought the player for a whopping amount of INR 5 crores. After playing for Kings XI Punjab in 2015, he was bought back by CSK in 2018.

Vijay made his ODI debut against South Africa on 27 February 2010. He scored 25 runs off 16 balls, and since then, he played only 17 ODIs. He was also selected for the 2010 ICC World T20. Unfortunately, he could not give his best in the campaign. Murali has played 9 T20Is and scored 169 runs only.

He was born on 1 April 1984 in Trichy Tamil Nadu and started playing cricket when he was 17 years old at the college level.